DXY Index Back to September High, EUR/USD at Six-Week Low

- With the Italian BTP 10-year yield rising back to its highest level since early-2014, the Euro has been hit across the board, falling to its lowest level in six-weeks.

- Losses by the largest component of the DXY Index have fueled the gauge back to its September high at 95.74.

- Retail traders are now net-long EUR/USD and GBP/USD after the US Dollar's recent surge.

The US Dollar (via the DXY Index) has continued to press higher, forging its fifth straight day of gains as the renewed tension between Rome and Brussels over the 2019-2021 Italian budget has yet to relinquish its grip on the Euro. It's tempting to suggest that the US Dollar's gains over the past five days have to do with the results of the recent Federal Reserve rate decision last Wednesday. But it's important to not confuse the signal with the noise, so to speak.

Prior to the September FOMC meeting, there was a 78% chance of a 25-bps rate hike in December 2018 and a 51% chance of another hike in March 2019. Now, these odds have subsided to 72% and 48%, respectively. It's atypical for the US Dollar to gain while the Fed's glide path is flattening and pricing out rate hikes, which leads us to the necessary conclusion that US Dollar gains are solely due to the weakness seen by the largest component of the DXY Index, the Euro (57.6% weight).

As noted last week, even though the European Commission typically requires deficit spending under 3% of GDP, officials asked the Italian government to take on less spending to help alleviate the country's debt burden (around 1.6% of GDP). As such, with the deficit target of 2.4% of GDP from 2019-2021, a clash between Brussels and Rome is destined.

The major factor feeding into Euro weakness, which should be the primary focus for traders in the near-term, is the Italian bond market. The Italian BTP 10-year yield reached 3.438% earlier today, its highest rate since early-2014. The nearly five-year high in yields comes after European Commission President Jean-Claude Juncker said that "we have to do everything to avoid a new Greece - this time an Italy - crisis." In other words, don't expect this issue to go away soon. 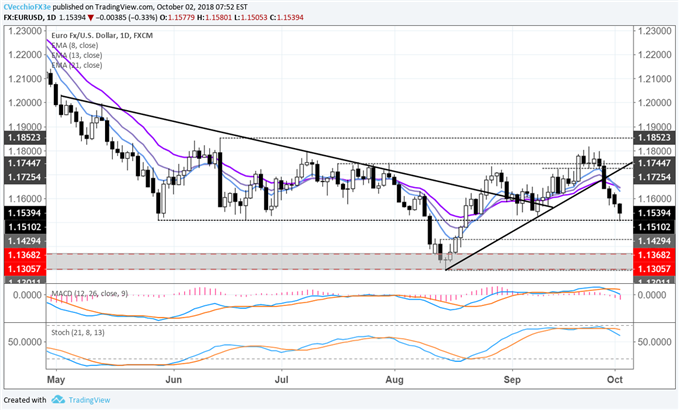 Ongoing weakness seen in Italian bondsc continues to impact the Euro in a significant manner. Just last week EUR/USD was trading near its highest level since June 14; today, it touched its lowest level since August 21. Last week we said that "the break of the uptrend from the August lows in EUR/USD increases the odds of a return back towards key support around 1.1510 over the next week." Indeed, with 1.1510 having been hit today, we now must consider further losses possible on the immediate horizon. 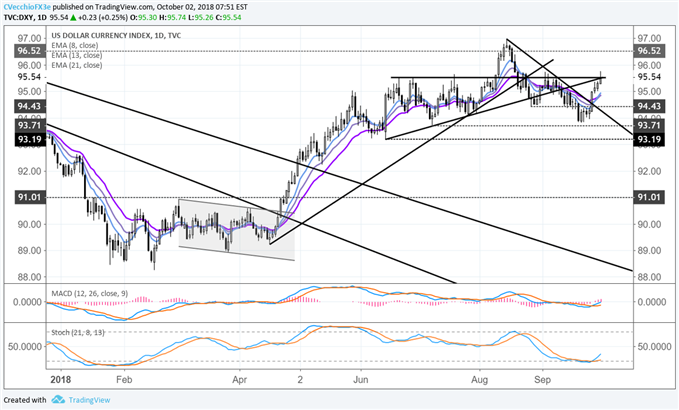 The renewed bullish structure continues to build as the DXY Index is now attempting to retake 95.53, prior key resistance in July and August. Price is now back above its daily 8-, 13-, and 21-EMA envelope, and the moving averages are back in sequential order again. Both daily MACD and Slow Stochastics remain in are continuing to trend higher, with the former nearly back to its signal line now.

Following the DXY Index close last week above 94.43 - a level which constituted a reversal through both the daily 8- and 13-EMAs, the late-August swing low, and the descending trendline off of the August and September highs - a neutral outlook is appropriate in the near-term. But a move back above 95.50 (95.53, to be conservative) would result in an upgrade to a bullish bias in early-October.