US Dollar (DXY) Hanging on by a Thread - What’s Next?

- Get the DailyFX Trading Guides for our 2017 Trades of the Year and Q1'17 FX forecasts.

The US Dollar remains vulnerable. While price action yesterday in DXY Index was looking constructive - by and large built on topping-like price action in EUR/USD - the lack of follow to the topside, and subsequent reversal, leaves the greenback hanging on by a thread. To be clear, none of the US Dollar weakness has to do with the Federal Reserve directly; as was the case in the days following the US elections in November, two rate hikes remain priced in for this year: June and December 2017 (per Fed funds futures).

Previously, elevated US yields were the driver behind US Dollar strength. But as the "Trump reflation trade" has fallen off course over the past couple of weeks - mainly due to a lack of clear policy signaling from the White House - we've seen the greenback decouple from US Treasury rates. The aggregation of stable US yields, a weaker US Dollar, and rising Gold prices necessarily points to one conclusion: markets are feeling that political risk is creeping in on the US economy. 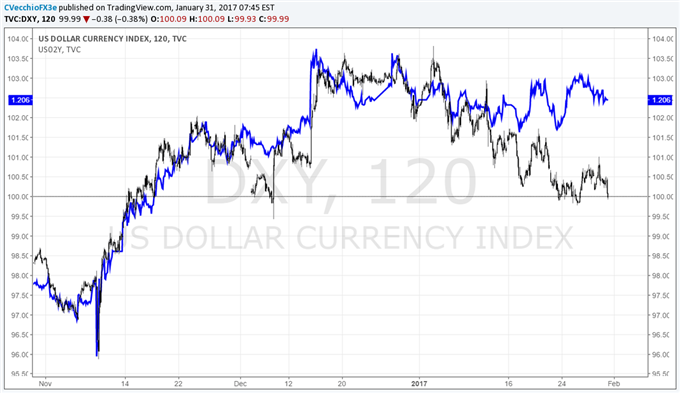 The fact remains that the "Trump reflation trade" was contingent upon sweeping tax reform and an infrastructure stimulus program; in other words, a wave of deficit spending. As per the Mundell-Fleming framework (or IS-LM-BOP model), given the United States' high capital mobility, loose fiscal policy should lead to a rise in inflationary pressures, which in turn should necessitate tighter monetary policy from the Federal Reserve.

Yet now that the timing and pace of fiscal reform is under question, this market feedback mechanism (expectations of looser fiscal policy = expectations of tigher monetary policy) is under pressure. With Republicans eying a repeal of the Affordable Care Act ("Obamacare") some time in March or April, and intraparty tensions rising across the political spectrum, it now seems more likely that an infrastructure spending bill won't appear until the end of 2017. As for tax reform? Reuters reports that "senior congressional aides said the spring of 2018 might be a more likely time than this year for the passage of legislation."

In other words: the market's hope for a wave of massive stimulus (via tax reform and infrastructure spending) that has fueled the "Trump reflation trade" may be evaporating. The shifting timeline here is undermining the market's belief in US Dollar strength, period.

See the above video for a discussion on why US yields have decoupled from the US Dollar, as well as for technical considerations and specific levels of importance in DXY Index, Gold, EUR/USD, GBP/USD, USD/JPY, AUD/JPY, NZD/JPY, and CAD/JPY.