- Widening interest rate differentials helping the US Dollar extend its gains, like in EUR/USD due to German-US yield spreads.

The US Dollar is closing back in on its 2016 highs today amid a continued rise in US Treasury yields. After last week's FOMC meeting in which a path to three rate hikes in 2017 was outlined, markets may be starting to feel that Fed officials may be a touch dovish themselves.

After all, only "some" of the officials incorporated the expected impact of a fiscal stimulus bump from US President-elect Trump, meaning that some policymakers may not have adjusted their forecasts upwards enough. Furthermore, we didn't hear from Fed Chair Janet Yellen that the path of rate normalization would be "gradual"; at least she appears to be bracing for the possibility of an economy heating up faster than previously anticipated.

For the US Dollar, the key takeaway, as mentioned first, is the rise in US Treasury yields (more of the 'Trump reflation trade' as we've called it since right after the election) , particularly in a world where in some places negative rates persist or rates are 'under control' in some form. Mainly, this means the Euro and the Japanese Yen. 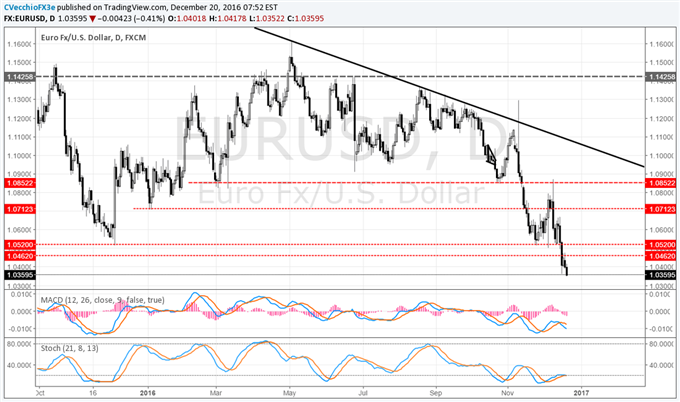 The ECB’s decision in early-December to alter how its QE program is undertaken can erode the market’s desire to hold Euros over the medium-term. Previously, yield curves in Europe were flattening as investors front-ran ECB bond-buying: with the ECB saying it wouldn’t buy debt with yields to maturity below the deposit threshold of -0.400%, there was a scarcity effect along the yield curve. This is no longer the case now that the ECB will buy bonds at any YTM, which reduces the need to go further down the curve. Concurrently, with the decision to buy 1-year debt, the ECB has signaled that it is basically altering policy to be able to keep the front-end of European yield curves pinned to the floor.

Between the ECB's policy shift and the Fed's signaling for a faster pace of rate hikes, the German-US 2-year yield spread has widened out significantly in the past few weeks, proving to be the driving force behind EUR/USD weakness. The same can be said about what's happening with the Japanese Yen. In a rising yield environment where the BOJ is pegging the JGB 10-year yield at or below 0%, the Japanese Yen stands out to be a loser. Interest rate differentials (US-Japanese 10-year yield spreads) have moved sharply against the Yen, and appear poised to do so for the foreseeable future (three- to six-months).

See the above video to see how these fundamental developments translate into actionable trade setups in EUR/USD and USD/JPY. Likewise, see the video for a look at GBP/USD and the UK PM's "Mayhem," why the timing of concerns over Australia's AAA credit rating are lining up with a bearish outcome in AUD/USD, and technical considerations in Gold, Crude Oil, USD/CAD, CAD/JPY, EUR/JPY, and GBP/JPY.