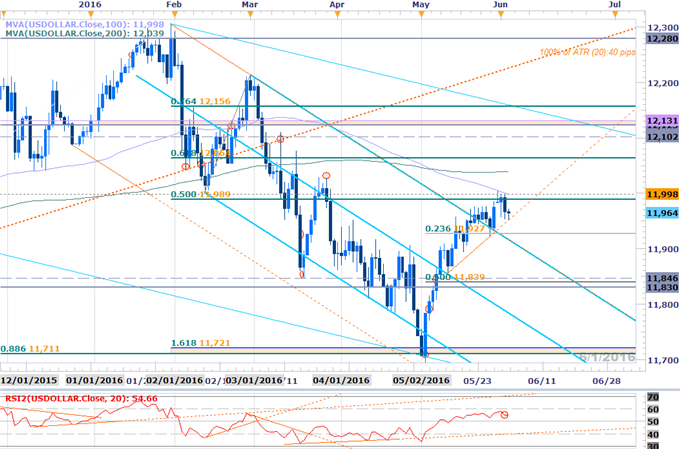 Technical Outlook: The U.S. Dollar Index broke above channel resistance last week with the rally off the May lows extending nearly 3% test the 50% retracement of the February decline at 11898. The 100-day moving average has continued to cap intraday advances and heading into the U.S. Non-Farm Payrolls report tomorrow, the focus is on a break of the range between basic trendline support & the moving average at 11998. Keep in mind we’re in the process of setting the monthly opening range and we’ll look for one to take shape over the coming days to validate our medium-term outlook moving deeper into June trade. 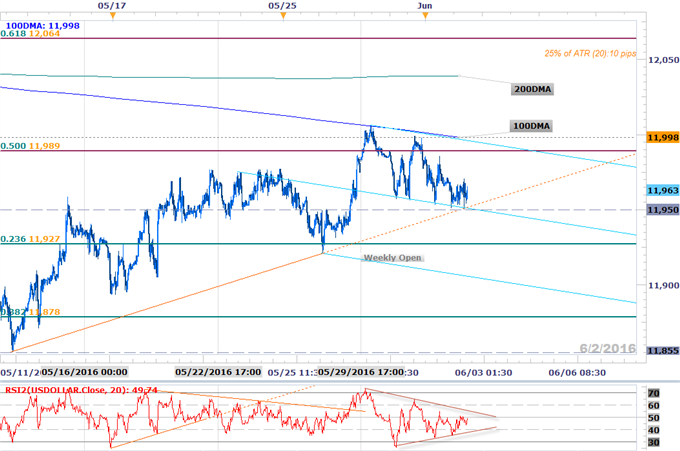 Notes: We’ve been following this slope off the highs on SB Trade Desk since the start of the week with the median-line continueing to support the index throughout session. The risk remains for further declines while below the upper medina-line parallel, which converges on the 100-day moving average at 11998. A break below near-term support at 11950 targets subsequent suport objectives into the 23.6% retracement at 11927 and the lower median-line parallel, currently around ~11908.

A breach of this formation invalidates the pullback idea with such a scenario targeting topside objectives at the 200-day moving average (~12039) and the key 61.8% retracement of the 2016 range at 12064. Market expectations are for a print of 160k tomorrow with unemployment widely expected to downtick to 4.9%- as always we’ll want to keep a close eye on the labor force particiaption rate which dropped to its lowest levels since January last month at just 62.8%.

From a trading standpoint, I would be looking for short-triggers on a rally into resistance on NFPs tomorrow- obviously dependent on the data. Continue tracking this setup and more throughout the week- Subscribe to SB Trade Desk and take advantage of the DailyFX New Subscriber Discount.

Check out SSI to see how retail crowds are positioned as well as open interest heading into the open of June trade. 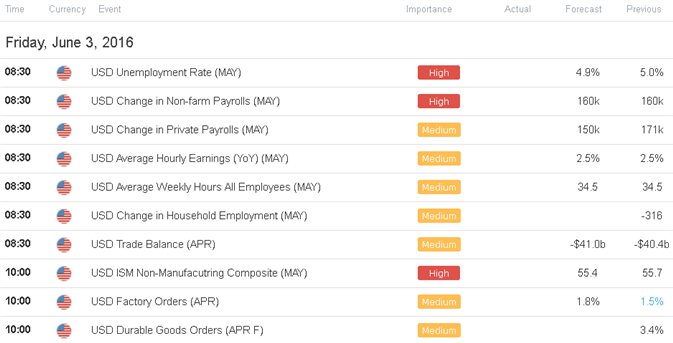