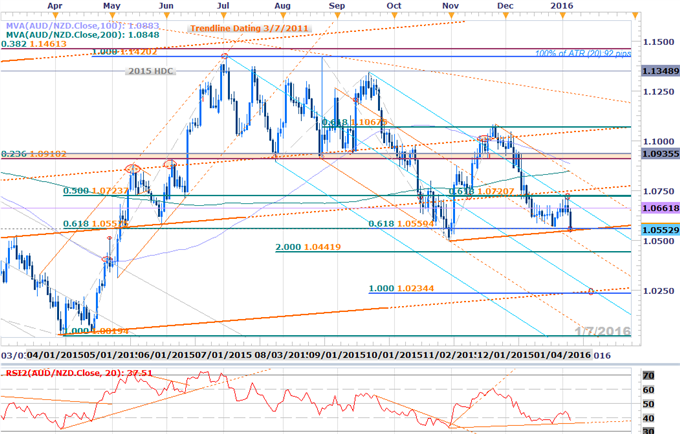 Technical Outlook: AUDNZD is testing key near-term support at the confluence of the 61.8% extension of the September decline, the 61.8% retracement of the 2015 range and slope support. Note that the origin of this slope is derived from the advance off the January 2014 low and has defined some major key pivots in price over the last 2 years.

A break below this threshold targets downward slope support extending off the August 31st high (~1.0515) and the measured move of the July-September range break at 1.0442. Subsequent targets eyed at the confluence of the 100% extension & slope support at 1.0230/40.

Interim resistance stands at the monthly/weekly/yearly open at 1.0662 backed by downslope resistance, currently around the 1.07-handle. We’ll reserve this level as our near-term bearish invalidation level with a breach above the highs shifting the focus back towards the 200DMA at 1.0848. 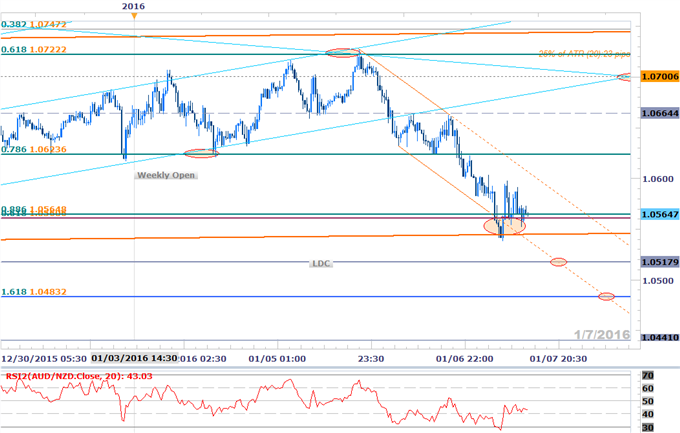 Notes:A break below the weekly opening range shifted near-term focus back to the short-side with the decline now testing confluence support at 1.0550/59. The pair has been trading within the confines of a tight descending channel formation off the weekly high & a break above channel resistance may offer a brief reprieve to the downside pressure. Such a scenario invalidates the immediate downside bias, but we would ultimately be looking to sell that rally. Near-term resistance stands at 1.0624 backed by the 1.0664 with our medium-term bearish invalidation level set at the upper median-line parallel / 1.07.

Bottom line: it’s a downtrend at support and a break lower from here targets the October low-day close at 1.0518 & the 1.618% extension at 1.0483. A quarter of the daily average true range (ATR) yields profit targets of 22-25pips per scalp. Added caution is warranted heading into tomorrow’s highly anticipated U.S. Non-Farm Payrolls report with the release likely to fuel volatility in risk-sensitive pairs. Consensus estimates are calling for a print of 200K on NFPs with the headline unemployment rate expected to hold steady at 5.0%. 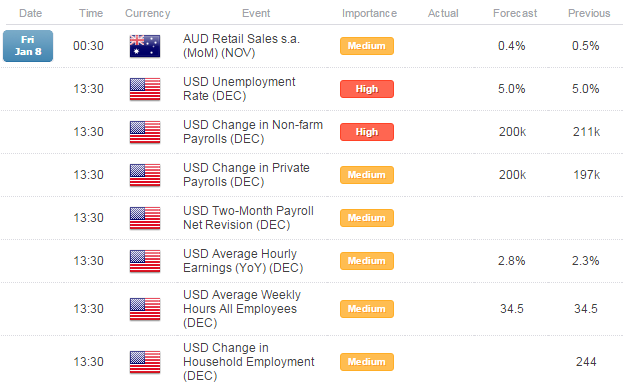