Gold prices have come under immense pressure since last week’s stellar non-farm payrolls report. The US reported an addition of 943k jobs for July. That fueled speculation that the Federal Reserve will accelerate its timetable to scale back monetary policy support. The US Dollar gained as rate traders priced in a more hawkish Fed. A stronger Greenback makes holding gold a more expensive endeavor for foreign investors.

XAU/USD has fallen nearly 5% since last week as gold bulls retreated. Some have seen the price drop as a buying opportunity, believing that the highly transmissible Delta Covid variant may throw a wrench into the US economic recovery. That narrative, however, is likely a long shot at best. The high US vaccination rate has policymakers favoring mask mandates and other soft restriction measures as opposed to economically crippling lockdowns. In fact, the CDC reported that the daily average for Americans receiving a shot has increased to the highest level since June 18.

Moreover, the hawkish view appears to be permeating further into the Fed’s groupthink. Charles Evans, Chicago Fed President, said earlier this week that he expects strength in the labor market to continue. When asked about a timeline for beginning to taper asset purchases, Mr. Evans said, “We’re coming upon a time when it’s definitely going to be appropriate to start.” This echoes commentary from Vice Chair Richard Clarida, who said earlier this month that tapering could start later this year.

Considering the recent Fed commentary, a clear path higher for gold is hard to see. One of the primary headwinds for gold now is a rise in real interest rates. Real rates reflect nominal bond yields after stripping out inflation and are seen as one of gold’s primary underlying drivers in financial markets. Gold prices typically fall as real rates rise. That is because gold is a non-interest-bearing asset, and higher rates increase an investor’s holding costs. The 10-year real yield – via the 10-year Treasury inflation-indexed rate – has risen sharply following last week’s jobs report. This, along with a stronger US Dollar, stacks the deck against gold bulls. 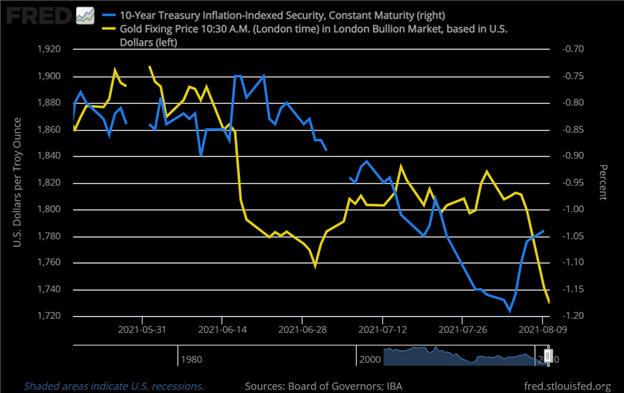 Gold prices smashed through the psychologically imposing 1700 and 1800 levels, although prices did recovery a portion of deeper losses quickly enough to move back above 1700. Still, the technical outlook remains bearish. A Death Cross formed from the 50-day Simple Moving Average (SMA) dropping below the 200-day SMA.

MACD continues to trend lower, while RSI remains in oversold territory. Prices may see resistance at a former level of support near 1760. To the downside, bears will target a price level near 1680, where a Double Bottom pattern birthed a bullish rally earlier this year. 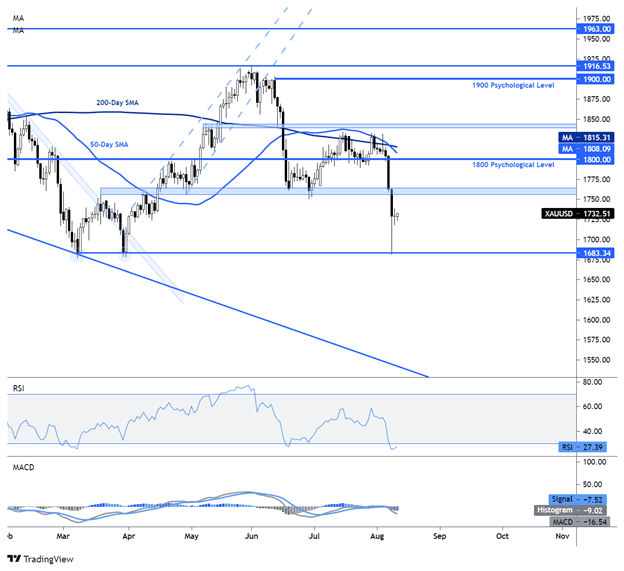