They’d been inspired largely by Apple’s concern that coronavirus-related shutdowns in China would hit revenue in the quarter to March. The contagion remains right at the forefront of market concerns. However, Tuesday’s claim by Chinese state media that a majority of state-owned manufacturing businesses were operational. after an extended break. seems to be assuaging worries, as did a report that confirmed cases of the virus in Hubei province where it emerged had fallen for a second day.

Japan’s trade data showed exports down by 2.6% on the year last month. This was much less severe than the 6.9% fall expected. Still, the data flagged a fourteenth straight month of falls, and comes after the big overall growth slip reported earlier this week.

The oil market remains underpinned by expectations that production cuts will be coming from the Organization of Petroleum Exporting Countries and allies including Russia, the so-called ‘OPEC Plus’ group.

Gold prices didn’t move much in Wednesday’s session, but they remain above the $1600/ounce mark crossed earlier this week in response to Apple’s woes. Prices made their highest daily close of the year on Tuesday and are back very close to 2020’s peak. That was the highest point seen since May 2013.

The market has clearly benefited hugely from haven demand as the coronavirus has spread, along with other counter-cyclical assets such as the Japanese Yen and Swiss Franc. Gold is also often viewed as an inflation hedge, so Wednesday’s Consumer Price Index data from the UK and Canada will attract attention later.

It’s notable that similar haven interest is also giving the US Dollar a lift. This may be capping interest in the gold market where many products are Dollar denominated. 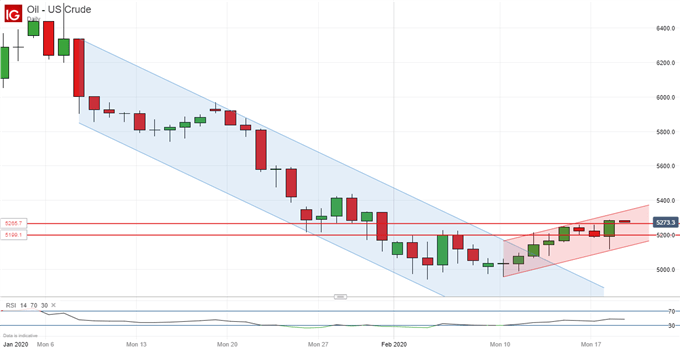 US crude prices’ bounce goes on, forging on to highs not seen for more than a week. A new modest uptrend channel seems to be forming, with bulls sights likely on the highs of January 28. These come in at $54.27 and mark the market’s last significant high.

For as long as the fundamental side of the market remains convinced that production will be reduced soon the gradual rise now in play seems likely to endure. 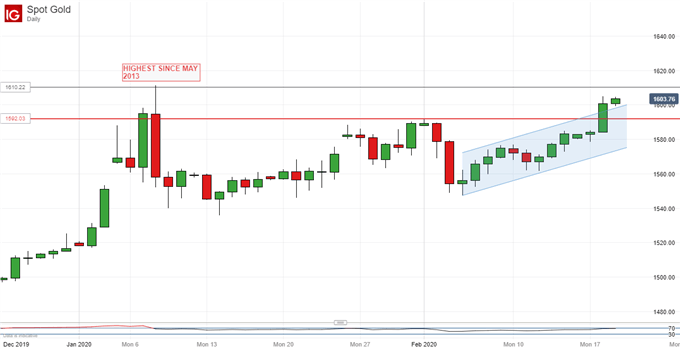 Gold prices have shot above their own previous uptrend channel after an impressive run of daily gains, even though most of them have been quite modest. The most obvious upside target is now this year’s notable high at $1610.11 but the market may well need a period of consolidation before it can durably reach that peak again.