Crude oil prices were up by more than 1% in Asia-Pacific markets on Monday as Chinese manufacturing data came in stronger than expects and markets looked ahead to December’s Organization of Petroleum Exporting Countries with hope of deeper production cuts.

Risk appetite was solid in the region despite signs of enduring trade tensions between China and the US.

These data boosted growth-correlated assets generally and oil in particular. The backdrop remains dependent on US-China trade headlines, however, with investors still mulling the likely effects of pro-democracy legislation passing the US Congress last week, supporting protesters in Hong Kong.

Energy markets also await the meeting of OPEC and other key producers, including Russia. This will take place later in the week. Iraq’s oil minister said on Sunday that deeper production cuts will be considered, but the extension of current reductions until June next year now seems to be the markets’ base case.

Gold prices slipped back as risk appetite remained quite robust, with riskier assets much more in demand.

A modestly stronger US Dollar also weighed on prices. That said reports that both the issue of Hong Kong and Chinese demands that some current US tariffs be rolled back will delay even an interim trade agreement keep the trade issue very much a live one for traders and, with it, gold’s underlying haven bid.

Markets will look with interest Monday to US manufacturing and employment data from the Institute for Supply Management. 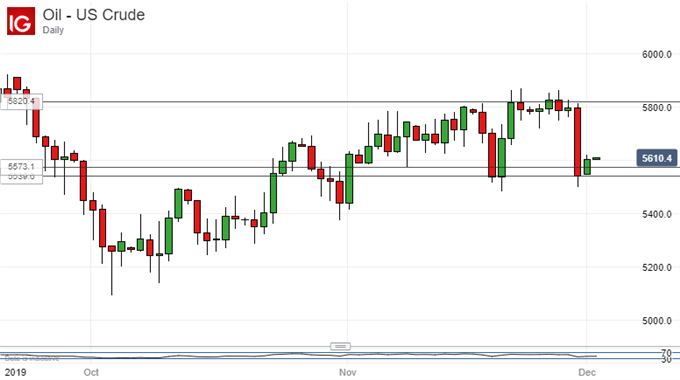 Prices have bounced at the last significant low, that of November 19 at $55.33/barrel. Getting there took them briefly through the second, 38.2% Fibonacci retracement of the rise up from October’s highs to November 22’s two-month peak. That came in at $55.73, a level which has once again been topped and which now forms near-term support once again.

The upside remains effectively capped by resistance now some way above the market at $58.20. This seems likely to endure at least until OPEC’s intentions are finally known.

Gold prices remain well within the downtrend which has marked them since they made September’s highs and taken them down to lows not seen since early September. 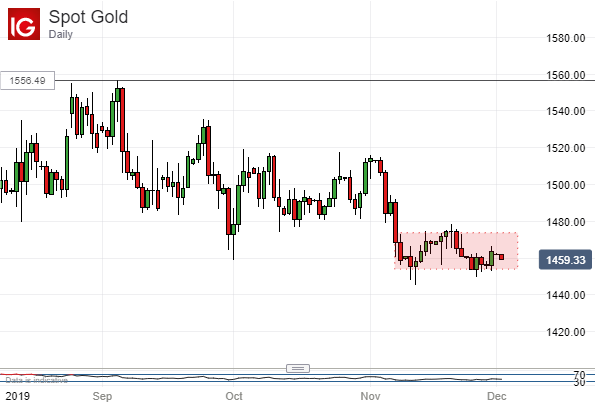 They’ve settled into a somewhat narrower range since November 6, but there seems little suggestion that the broader downtrend is under any threat. Support in the $1454 area has stymied the bears on two recent occasions, once on November 12 and once at the end of the month. They may survive another test but it seems unlikely that this prop will hold for much longer, unless trade news becomes markedly worse.