Gold prices edged up on Friday as worries about the likely Chinese repercussions to Donald Trump signing legislation this week in support of democracy and human rights in Hong Kong continues to drain risk appetite.

The two bills mean the US will review the territory’s autonomy form China annually while refusing to sell munitions and equipment to the Hong Kong police. With more protests planned in Hong Kong this weekend, China’s response will be key.

Their signing was welcomed by huge numbers of people taking to the streets of Hong Kong, thanking the US. China has already reacted angrily to the legislation’s passage, but the extent to which this anger might derail the interim trade deal to which both Washington and Beijing are reportedly close remains unclear.

At any rate, gold benefitted from investors doubts as riskier assets like equity wilted, with US market direction lacking due to the Thanksgiving break.

Still, the metal looks set for its worst week in over two years having been hit hard over the past month by trade optimism which has yet to entirely dissipate. Trade headlines and fallout from this weekend’s protests are likely to remain in overall charge though.

Crude oil prices were modestly lower, a typical enough situation whenever risk appetite falters. Next week’s meeting of the Organization of Petroleum Exporting Countries and other producers, including Russia, is now squarely in focus.

The market suspects that current production cuts will be extended well into 2020 with regulators reportedly looking for ways to boost compliance.

Despite rising on Friday gold prices remain very close to November’s low which is also a three-month daily-chart nadir. 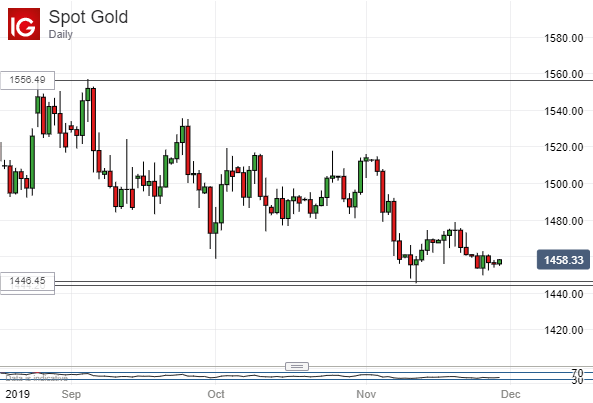 That low ($1446.45) comes in only a whisker above the second, 38.2% Fibonacci retracement of the rise up from May’s lows to the peaks of September. That’s $1,444.20 and, although it might offer considerable support in a market so driven by binary risks, if it gives way further falls will be highly likely.

Oil bulls continue to find the opening level of September 24 a tough resistance level to top. It comes in at $58.20 and, back in September, marked an acceleration of the price falls which took prices down their October lows. 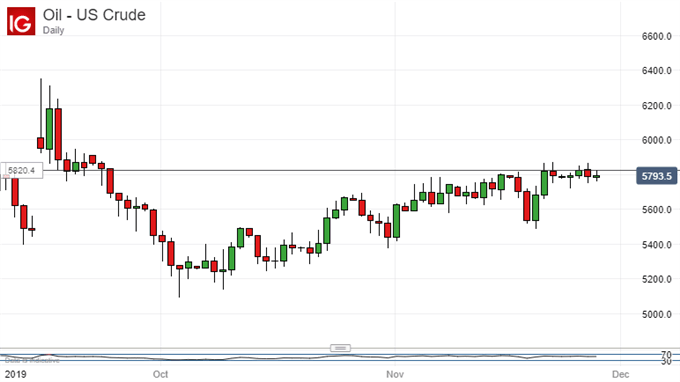 The market seems unlikely to durably top this level until it knows what OPEC and its allies have planned, but confirmation of an extension to cuts could well see it left behind.