Crude oil prices surged along with global equity markets after headlines broke out that the US and China had made progress on trade talks. However, markets were in peril after a series of oscillating headlines left investors dizzy between good news and bad news. Ultimately, however, market mood was left on a relatively high note with Brent closing just shy of three percent higher for the day. Gold prices did not fare well.

The yellow metal closed lower for a second day in a row after positive trade developments cooled the urgency of Fed rate cut bets and subsequently reduced the appeal of holding non-interest-bearing assets. This was amplified after the FOMC minutes revealed officials were split on when to reducing easy, with a few remarking that markets have been over-pricing future easing prospects.

Both gold and crude oil prices will be watching for further negotiations between Chinese Vice Premier Liu He and US officials. Markets were rejoiced after news broke that the US is entertaining the notion of implementing a currency pact with China as an add-on in a partial trade deal. All eyes will now be on how talks go Friday and how officials from both sides will leave things off before proceeding further – or not.

Baker Hughes drilling data will also be published on Friday with expectations of an average rotary rig count of 847.33, lower than the previous 855 print last week. The number of extractive sites is currently hovering at a two-year low while demand for crude oil continues to decline as part of a broader slowdown in global growth. To quote the recently-appointed IMF Director, the world is experiencing a “synchronized slowdown”.

Amid the buoyancy in sentiment, crude oil prices broke above the multi-month congestive range between $57.24/bbl-$59.34/bbl and may now aim to retrace some of their recent losses. Traders may wait to add exposure until more clarity is given on US-China trade talks or Brent breaks higher with follow-through. Having said that, taking a wide perspective supports the notion that crude oil prices may ultimately capitulate in the face of global headwinds. 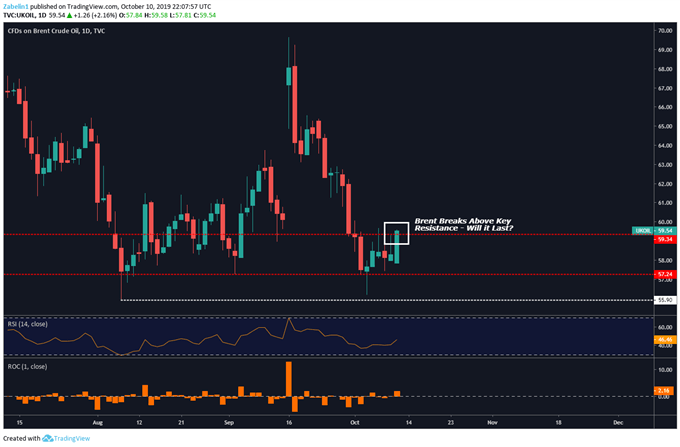 Gold prices are currently trading below the early-September descending resistance channel after the yellow metal attempted to breach it on October 10. As floor and ceiling converge, gold prices may either capitulate and possibly validate the bearish reversal pattern I pointed out this week or may break above resistance. If the latter occurs, traders may re-assess the yellow metal’s price movement before further adding exposure. 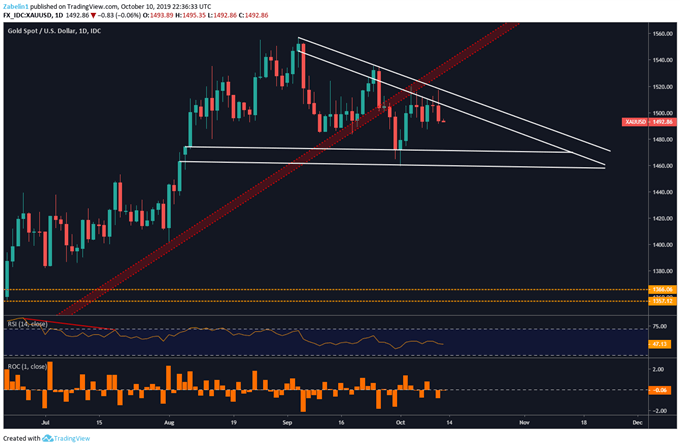