Gold prices marked time amid a lull in news-flow guiding Fed rate hike speculation, the central theme driving price action. Selling pressure may re-emerge before long however as the priced-in probability of tightening before the end of the year continues to swell. Traders now imply the chance of an increase at 68 percent, the highest in four months.

Scheduled comments from Chicago and Minneapolis Fed Presidents Charles Evans and Neel Kashkari may inspire a near-term response but follow-through seems unlikely. Both officials have made their views widely known recently and neither is a voting member of the current FOMC rate-setting committee. Traders will likely await the release of minutes from September’s policy meeting as next major inflection point.

Crude oil prices lurched higher anew, revising levels unseen since the WTI benchmark carved out a swing top in early June. The advance followed comments from Russian President Vladimir Putin, who said his country is prepared to cooperate with Saudi Arabia on supply management after the latter country led OPEC to an output cut deal in Algiers last month.

Putin’s comments, deliveredat the World Energy Forum in Istanbul, seem to contradict his Energy Minister Alexander Novak, who said he doesn’t expect to reach accord with his OPEC counterparts at this gathering. Frequent reversals in Russia’s public position on coordinating price-boosting efforts have become commonplace. It would not be surprising to see today’s gains fizzle as quickly as yesterday’s decline.

Where are gold and crude oil prices heading in the fourth quarter? See our forecasts to find out! 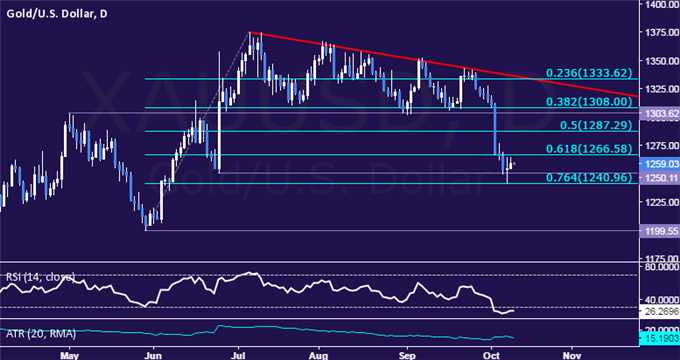 CRUDE OIL TECHNICAL ANALYSIS – Crude oil prices pushed higher anew, negating a bearish reversal signal identified yesterday. Negative RSI divergence warns upside momentum is ebbing however and hints a reversal may yet materialize in the near term. A turn below the 76.4% Fibonacci expansion at 50.50 exposes the 48.97-49.07 area (August 23 high, 61.8% level). Alternatively, a push above the June 9 high at 51.64 targets the 100% Fib at 52.82. 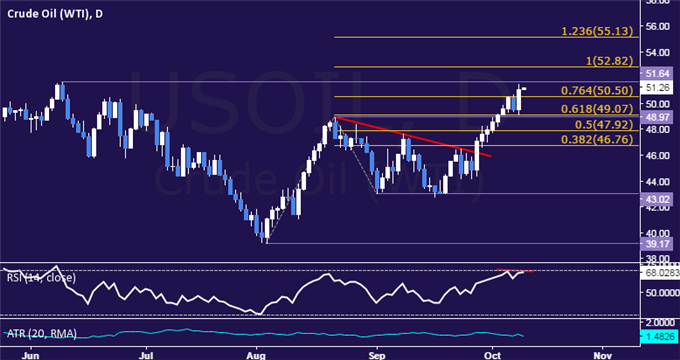