Gold at Risk on Fed Outlook But Bank Crisis May Interfere

Having trouble trading Gold? This may be why.

At first blush, the landscape looks treacherous for gold prices in the fourth quarter. Federal Reserve Chair Janet Yellen all but promised an interest rate hike at the press conference following September’s FOMC meeting. Using unusually strong language, the central bank chief said she and most of her colleagues agreed that as long as economic do not materially deviate from their current path, an increase in 2016 will be appropriate.

Most other FOMC voters have echoed the Chair’s hawkish tone.Meanwhile, the fundamentals seem to be playing into their hands. Economic news-flow seems to be stabilizing relative to consensus forecasts having mostly disappointed since late July. Still, investors remain skeptical. The priced-in probability of a hike before year-end is barely better than even at just 52 percent.

A strong inverse relationship between the policy path implied in Fed Funds futures and gold prices suggests that the metal is likely to decline as this disparity unwinds. This makes intuitive sense. Tighter monetary conditions undermine demand for substitutes to fiat currency and higher yields make assets that offer no return comparatively less attractive. 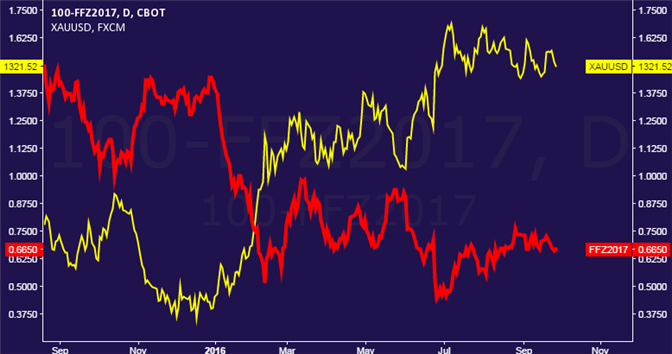 Emerging banking sector stress is a wildcard however. The markets were noticeably rattled as shares of German lender Deutsche Bank sank amid solvency concerns following a demand for $14 billion penalty by US regulators for MBS-related wrongdoing in the run-up to the 2008-09 financial crisis. Wobbly banks encourage demand for cash as well as alternative stores of value, including gold. Deepening turmoil at Deutsche may metastasize into a larger shake-out, pushing Fed rate hike bets into the background and sending the metal upward. 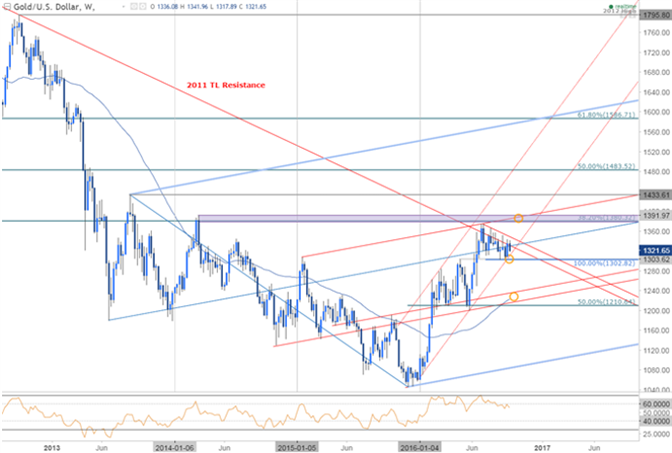 As noted in our previous forecast, the second quarter rally in gold had “marked the largest weekly trading range since February with ongoing weekly divergence into these highs leaving the immediate topside bias vulnerable heading into the open of July trade…we’ll take a more neutral stance heading into 3Q with a general topside bias in play while above 1200.” In fact, gold topped just one week later and despite pressing into a fresh 2016 high, prices are virtually unchanged for the quarter after failing to breach above trendline resistance extending off the record 2011 high.

Gold continues to hold within the confines of an ascending channel formation off the yearly lows with prices looking to close the third quarter just above near-term support at 1303. This level is defined by the 100% extension of the decline off the high, the May high and basic channel support. A sliding parallel extending off the yearly high has continued to cap topside advances for now and heading into the fourth quarter the focus will be on a break of this near-term range between trendline resistance & 1303.

A topside breach targets a critical resistance range at 1380/91 where a sliding parallel extending off the 2015 high converges on the 38.2% retracement of the 2011 decline and the 2014 high. Subsequent topside targets at eyed at 1433 & 1483. A break of channel support shifts the focus lower towards the lower parallels with our broader bullish invalidation level set to the 50% retracement at 1210.

It’s worth noting that the Commitment of Traders report highlights record open interest in gold, suggesting that prices are at risk here and that the next move is likely to be sudden and significant. From a trading standpoint, gold may be trading within the confines of a bull flag formation and a break higher would keep the broader long bias intact targeting subsequent topside objectives before a much more substantial correction lower, possibly heading into the close of the year.