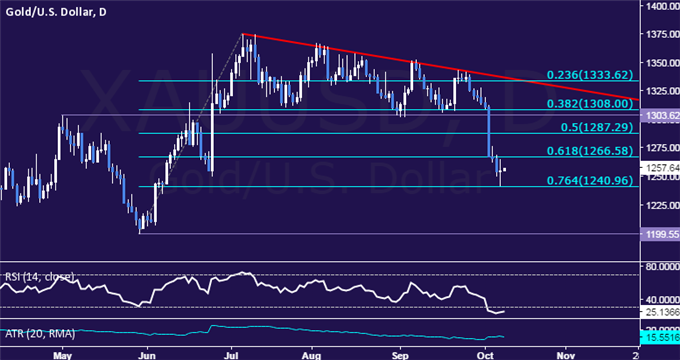 Gold prices whipsawed after September’s US jobs data, initially rising after payroll gains fell short of economists’ expectations only to reverse lower as markets seemingly decided the miss is insufficient to derail a Fed rate hike before year-end. Indeed, the priced-in probability of an increase finished Friday’s session at 64 percent, unchanged from the seven-week high set on the prior day.

Looking ahead, a lull in high-profile economic news flow leaves markets to digest recent volatility. Follow-through may prove tepid as traders withhold directional conviction ahead of key event risk due later in the week, including minutes from last month’s pivotal FOMC meeting as well as US retail sales and consumer confidence figures.

Knee-jerk volatility remains a threat however. Deutsche Bank failed to reach a deal with US regulators lowering a $14 billion penalty for MBS-linked wrongdoing in the run-up to the 2008-09 financial crisis (according to Bild). Returning insolvency fears may offer a near-term boost to gold prices. Meanwhile, crude oil may remain sensitive to stray Russia/OPEC headline risk.

What do crude oil and gold price patterns say about on-coming trends? Find out here!

CRUDE OIL TECHNICAL ANALYSIS – Crude oil prices put in a Bearish Engulfing candlestick pattern, hinting a reversal downward may be ahead. A turn below resistance-turned-support at 48.97 – the August 22 high – opens the door for a test of the 23.6% Fibonacci retracement at 47.99. Alternatively, a reversal above the Engulfing high at 50.72 sees the next upside barrier at 51.64, the June 9 top. 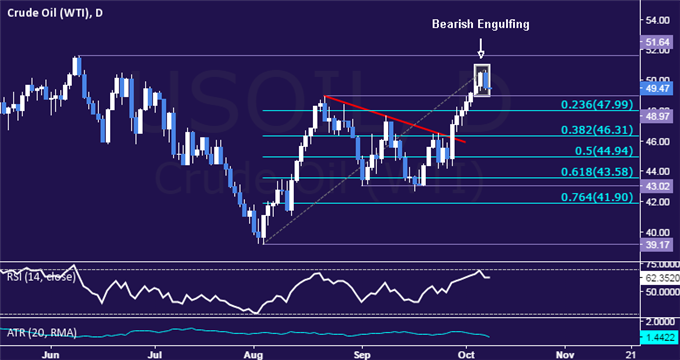