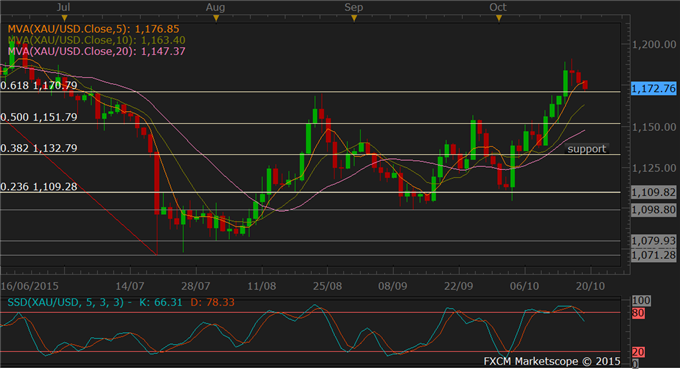 Commodities got a reprieve on demand prospects when Chinese third-quarter growth came out better than forecasted at 6.9 percent; although still lower than last quarter’s 7 percent. Earlier on Friday, oil, copper, and gold pared two-day gains after a recovery of the US dollar.

WTI oil traded sideways in the morning above $47 after active rig count by Baker Hughes dropped for the 7th week to a five-year low. Enduring declines in US drilling activities may eventually ease the supply glut. A better than expected third-quarter Chinese GDP and implied demand prospects also helped to retain prices above this support level.

Copper retraced up to 2.3990, trimming 1 percent decline from a double dip to 2.3800 in New York and Asian morning. Copper staged volatile swings in last session in line with a retreat among commodities while USD and U.S. equities rallied.

While copper producers continue to go through mergers and cutbacks, copper carry-trade in China remains live to exploit both the interest rate gap and price gap between importing and selling into domestic market. This supports copper prices somewhat and dip-buying persists.

Gold held loss from its three-month high after good U.S. data last week and decent Chinese Q3 growth dampened needs for safe haven assets. Jobless claims in the US unexpectedly slipped to the lowest in four decades while consumer sentiment rose higher than forecast this month. Moderate risk-buying in Asia after this latest sign of resilience in the Chinese economy saw the metal sliding towards next support at 1169.

GOLD TECHNICAL ANALYSIS – Gold briefly broke below 1170 though generally stayed above the support level. Like other commodities, momentum and macro sentiment will be the drivers in whether gold will break or fail to test lower technical level from here. The precious metal sets for a lower reversal after its peak on Thursday thus present deterrence to the gold bulls.

COPPER TECHNICAL ANALYSIS – Copper touched down to 2.3800 on a second day of decline, near the 23.6% Fibo at 2.3775. These two levels may limit downward extensions in the short term although not for long while momentum is building on the downside. Support level below that is 20-day moving average at 2.347, where the bears may consider position at break. 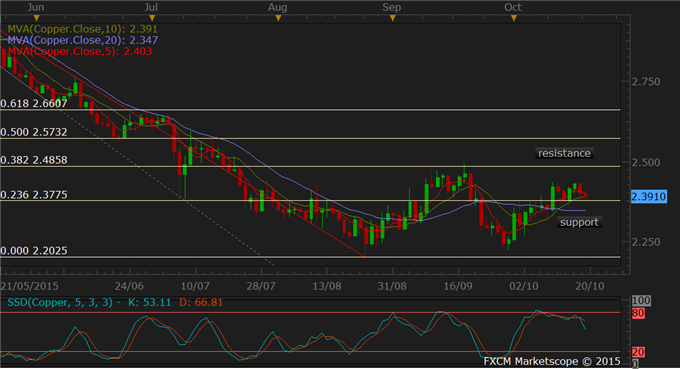 CRUDE OIL TECHNICAL ANALYSIS – WTI oil held above $47 today amid upward intraday momentum. Lower extensions will not be significant to price action except for a break of 46 support level. On the daily chart, oil has traded flat half way through a downward correction. Momentum signals indicate a rebound toward October high may be in store. 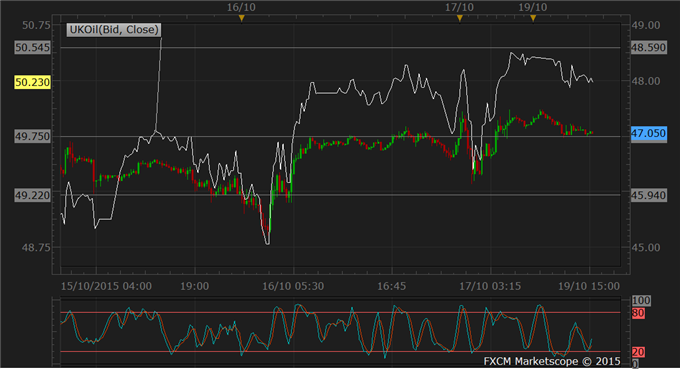