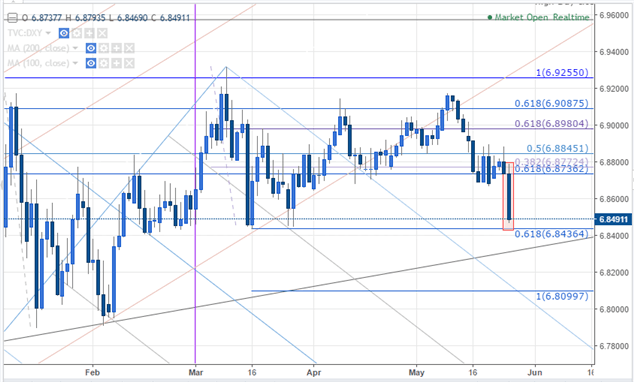 - The Chinese currency and Chinese stocks all rose after China disagreed with Moody’s downgrade.

- Yuan faces increasing pressure amid its reduced use in both its largest offshore market and global markets.

The offshore Yuan gained against the U.S. Dollar on Thursday, with the USD/CNH breaking below a key support level, 6.8736. This is less likely driven by a Dollar weakness, as the DXY (the Dollar Index) rose slightly over the same span of time.

The Yuan was not the only one that had a large gain on Thursday. Shanghai Composite Index went up by +1.43%, touching the upper bound of a downward channel. Unlike in early April when the equity market was boosted by the launch of a new Special Economic Zone, there was no major new development coming from China’s side on the day to lead such a rally. 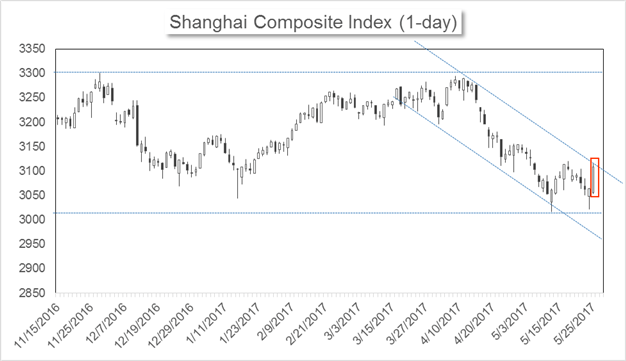 Chinese media’s headline news on Thursday was that China disagrees with Moody’s downgrade. One major reason that Moody’s scaled down China’s rating is that it sees the Chinese government debt-to-GDP ratio to rise to 40% by 2018. In the Chinese headline news, it is stated that China has a different opinion on this and expects the ratio to remain at around 36.7%, as what was seen in 2016. 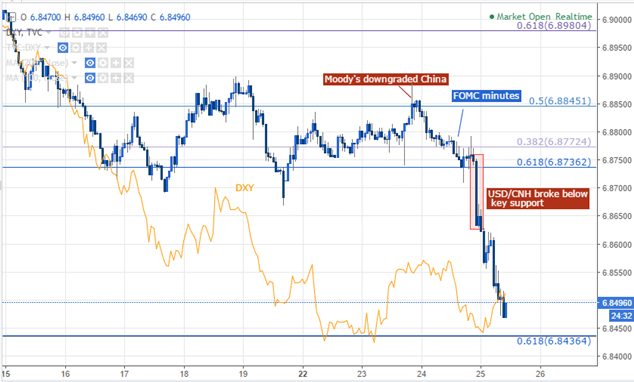 The 1-hour chat shows that Moody’s downgrade on China brought limited impact to the offshore Yuan rate; the USD/CNH failed to break above a key resistance level. When the Asian markets opened on Thursday, the offshore Yuan began to rise against the U.S. Dollar, coupled with Chinese stocks’ rally.

However, how long the Yuan can continue to gain is a question. In the short-term, the offshore Yuan has already rose above the PBOC’s guided level. Traders will want to keep an eye on the Yuan fix on Friday, to see whether the regulator will recognize Yuan’s strength officially. If not, the Yuan could fall back to the range where it stayed for the past two months.

In a longer-term, the Yuan still faces considerable pressure from losing its popularity: Yuan’s share in global payments in April dropped to 1.6%, the lowest level since October 2014; Yuan settlement in Hong Kong in the first quarter plunged -27% compared to a year ago. If China wants to support the Yuan, it will need to burn foreign reserves, which is already at a level that many market participants find psychological important. A sustainable fall below this level may increase concerns on the country’s financial power to preserve the stability of the currency.