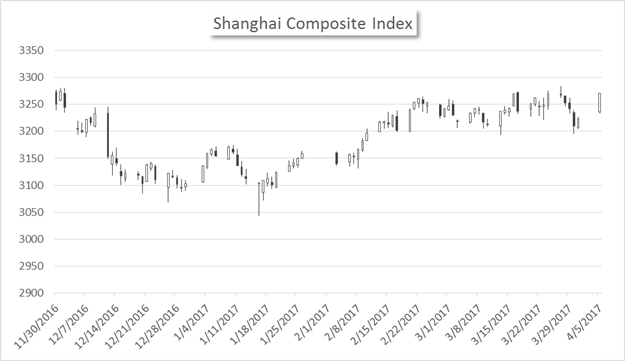 Chinese Equities Surge as a Special Economic Zone is Released

- Check out how retail traders are positioning on equities using the DailyFX SSI.

The move followed Chinese government’s announcement on Saturday that Xiongan, a city in Hebei province 129 km (80 miles) south of Beijing, will become the third special economic zone (SEZ) in China. The previous two SEZs were established more than 25 years ago, Shenzhen special area in 1980 and Shanghai Pudong area in 1992.

According to the announcement, Xiongan New Area is designated to “take over Beijing’s noncapital roles” and “spur economic growth”. This is considered to be “a major historic and strategic choice made by the Communist Party of China Central Committee with Comrade Xi Jingping as the core”.

Almost immediately following the release, property speculators rushed into Xiongan, sending local housing prices soaring. As of the morning on April 2, some real estate prices have jumped to sixth times of what they were 20 hours ago. In order to curb the extreme moves in the property market, local authorities have suspended property purchases and temporarily closed real estate agencies and real estate construction sites later on Sunday.