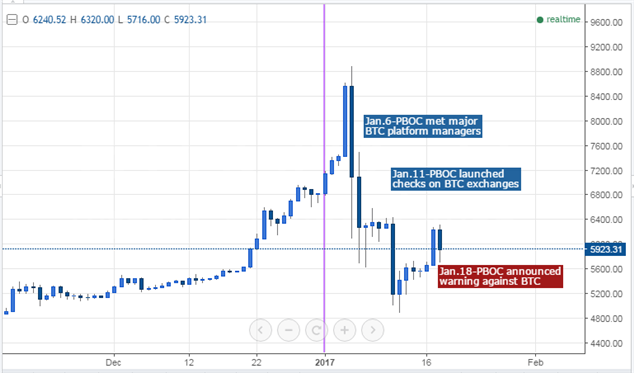 - The onshore Yuan liquidity remained tight despite of the Central Bank’s injections.

- Bitcoin plunged -5.4% against the Yuan on Wednesday following PBOC’s warning against risks in Bitcoin trading. China Central Bank’s Shanghai Head Office said on Wednesday that the regulator has found irregularities in major Bitcoin exchanges: Bitcoin China operated beyond the scope of and failed to use third-party custody accounts for investors’ funds; OKCoin and Huobi carried out margin trading without regulator’s approval and also failed to set up internal anti-laundering compliance program. Looking forward, traders will want to keep an eye on PBOC’s moves; it is less likely that the regulator will ban the digital currency, but may introduce regulations to strengthen oversight on its trading. 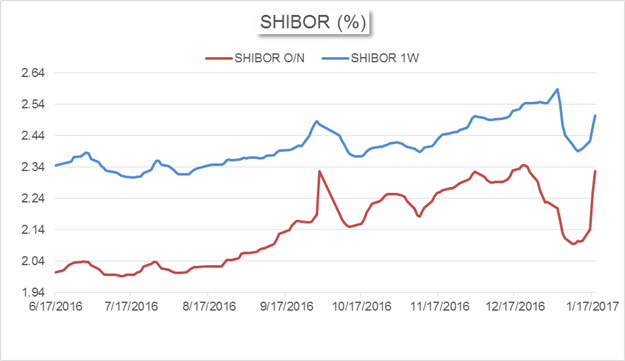 The PBOC added a net of 410 billion Yuan of cash through reverse repos on Wednesday, marking it the third consecutive day with a net injection. However, this has not eased the condition. According to Hexun News, a leading Chinese financial media, traders in major Chinese banks told that banks are concerned of whether the PBOC will renew Medium-term Lending Facility on Thursday and thus have been cautious in lending. Also, China’s monetary policy in 2017, which has become tighter compared to previous years, may have also weighed on the liquidity condition.

- The expansion in China’s housing prices has slowed down in the last month of 2016 amid restrictions on home purchases, according to a report released by the statistics bureau on January 18th. Property prices in tier-one cities saw decreases in December on a monthly basis: this is the first time that Beijing reported a drop in housing prices in 2016; prices in Shanghai fell for the second consecutive month and prices in Shenzhen fell for the third straight month. Regulations placed on the housing market are likely to remain in effective in 2017, as Chinese policymakers have set stabilizing the housing market as a national priority.