China’s Market News: Top Priorities for the Economy in 2017

- Yuan gained against a basket of currencies despite losses against the U.S. Dollar last week.

- “Maintaining stability while seeking progress” has been set as China’s main theme for 2017.

- The Chinese currency gained against a basket of currencies last week despite losses against the U.S. Dollar. While the Yuan weakened -0.77% onshore and -0.56% offshore against the Dollar, all three Yuan indexes increased over the same span of time. The CFETS Yuan Index, BIS Yuan Index and SDR Yuan Index rose +0.31%, +0.48% and +0.38% respectively. 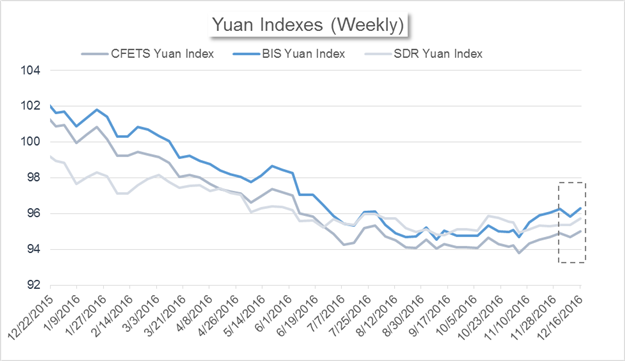 At the same time, both onshore and offshore Yuan borrowing costs remained elevated, although for different reasons.

In the onshore market, the PBOC has been injecting cash in the effort to meet the liquidity need. On Monday, the Central Bank added a net of 65 billion Yuan through reverse repos; however, Yuan funding costs from overnight to 1 year in Shanghai interbank market continued to climb up. In specific, 1-month and 3-month SHIBOR hit the highest levels since July 2015; 1-month SHIBOR has increased for 28 trading days in a row and 3-month SHIBOR rose for 43 consecutive trading days.

While the onshore tightening is mostly resulted from increasing demand in liquidity, the offshore uneased condition is more likely led by intended cuts in supply. The overnight HIBOR remained at 10.00%, which makes it relatively expensive to short the Yuan.

- Chinese top policymakers have set strategies for the economy in 2017 at the annual Central Economic Work Conference held last week. Here are the highlights and analysis:

China’s economic growth has slowed down to 6.7% in the first to third quarter in 2016. It is expected to drop further to 6.5% in 2017 according to a report released by the Chinese Academy of Social Sciences, a leading Chinese think tank, on December 19th. Within such context, maintaining stability in the economy as well as in financial markets has been set as the country’s top priority among all.

Chinese policymakers see supply-side reforms to be inevitable when solving this fundamental issue and will continue to implement reforms despite of short-term pains brought by them.

A good example for balancing stability and reforms is the recent regulators’ move on the coal market. Coal producers have been required to cut excessive capacity since the beginning of 2016. As it approach to winter, coal prices began to soar in October amid concerns and speculation on insufficient supply of utilities. On one hand, the National Development and Reform Commission (NDRC) worked with coal producers and commodities exchanges in the effort to maintain short-term stability in supply and price. On the other hand, the regulator reiterated that coal producers will still need to reduce low-quality supply in a longer term.

We may see more fiscal measures designated to support the economy over the following periods, such as increased fiscal budgets, additional tax cuts as well as government-led projects; monetary policy may be used more to deal with the liquidity dilemma.

More tightened rules on financial markets are likely to be introduced from top regulators, including the PBOC, CSRC, CBRC and CIRC.

The Conference emphasized on the real estate sector in specific, restricting loans to be issued to speculators in the housing market. China’s Central Bank will likely continue to work with local governments and commercial banks to strengthen oversight on home loans.

Debt-to-equity swap has been introduced as a major solution; private companies are also encouraged to use other market-driven approaches to reduce their high leverage.

- The PBOC will include off-balance sheet wealth management products (WMPs) into its Macro Prudential Assessment, a system to evaluate banks’ risks, beginning in 1Q 2017. This measure was first mentioned in October, as a move of the Central Bank to strengthen oversight on commercial banks.