- China Foreign Exchange Trade System (CFETS), the FX trading platform operator, announced on Thursday that it will adjust the way to calculate the CFETS Yuan Index, a key measure of the Yuan against a basket of currencies, from January 1st, 2017.

The weight of the U.S. Dollar in the CFETS Yuan Index will be reduced to 22.40% from 26.40% and the Euro’s will be cut to 16.34% from 21.39%; 11 new currencies will be added into the index, including the South Korean Won, a long-suggested currency to the trade-weighted basket, as South Korea is the fifth largest trading partner to China. CFETS told that it will assess the currency basket on an annualized basis and adjust the composition of the basket and corresponding weights according to changes in international trade weights. 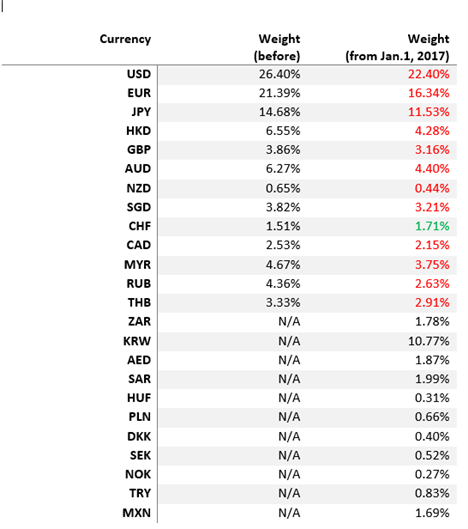 - China’s onshore liquidity mechanism is facing a problem: despite that the Central Bank has been injecting cash into the interbank market, non-bank institutions remain in short of liquidity as banks have tightened credit issuance to them in the effort to curb banks’ own risks.

The overnight Yuan borrowing rate in Shanghai interbank market began to drop since last week: SHIBOR O/N fell from 2.345% on December 21st to 2.227% on December 29th, which indicates that conditions for banks to meet their imminent-term liquidity need have improved. 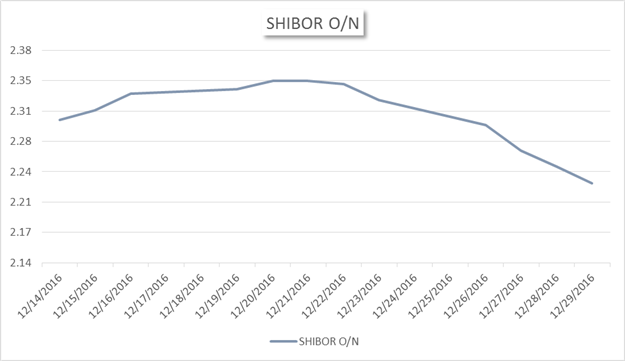 However, for non-bank institutions, they are still struggling to cover shortfalls in cash which normally gets worse as it approach to the year end. On December 27th, the 1-day government bond reverse repo rate jumped to 33.00% in the afternoon session and closed at 18.55%, the second highest level this year (the highest was 35.41% on September 29th). The rate remained elevated and volatile on Wednesday and early Thursday before dropped to 0.55% at Thursday close. 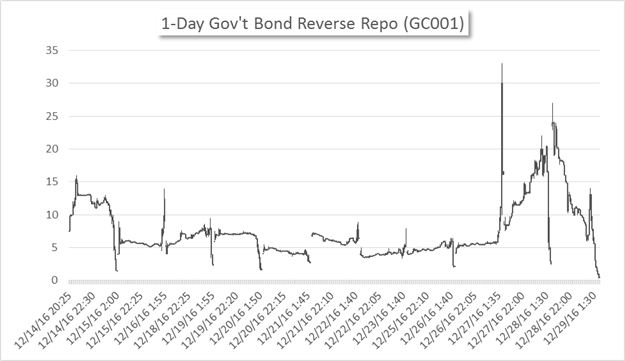 This is not the first time that China’s liquidity mechanism encountered trouble recently. On December 15th, both 5-year and 10-year government bond futures plunged and suspended in trading, triggered by Fed rate hike and market rumors; yet, a root cause is that banks tightened credit issuance to non-bank institutions. One of the regulator’s responses on that day was guiding banks to lend to non-bank institutions.

Within such context, China’s Central Bank is less likely to cut the reserve requirement ratio soon, despite of increasing speculations on it. Pumping more water into a clogged tube not only may fail to feed dry areas but could also flood somewhere else, such as the property market, which has already attracted too much cash, fueling price bubbles.

- China’s Finance Ministry held the annual meeting on December 29th to set the agenda for 2017. The Finance Minister Xiao Jie said that the department will expand fiscal spending appropriately, continue to cut taxes and fees and make sure economic growth to fall within a reasonable range next year.

- State-owned enterprises (SOEs)’s debt-to-asset ratio rebounded to a high of 61.6% in November, following drops in two months in a row, according to China’s statistics bureau. This indicates that SOEs have not made substantial progress in reducing leverage. On the contrary, the debt-to-asset ratio of private-owned companies continued to fall in November, down -0.2% to 51.1%. In terms of profits, SOE’s growth increased to 8.2% from 4.8% in the month prior while the growth of private-owned companies dropped to 5.9% from 6.6%; this is the first time in six years that SOE’s profits expanded faster than private-owned companies’.