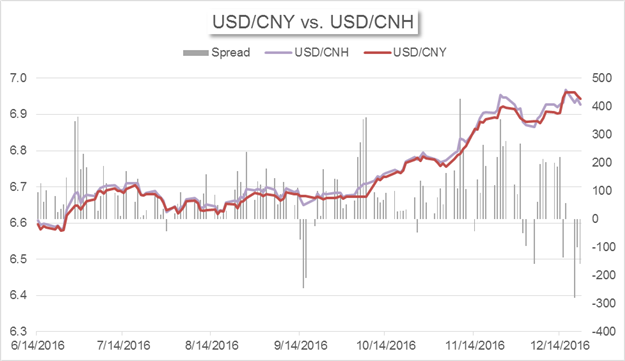 Let’s take a look at the offshore rate first. Yuan’s overnight funding costs in Hong Kong, the largest offshore market, dropped to 6.94% on December 21st from 10.82% a day ago; however, the borrowing cost remained relatively high compared to an average of 2.82% over the past twelve months. This makes it still expensive for traders to short the Yuan in the offshore market.

On the other hand, the onshore liquidity has already been tight as China’s Central Bank tweaked its credit strategy in the effort to guide investors to reduce leverage and curb risks. On December 15th, Fed rate hike decision and multiple rumors on bond defaults triggered a crash in bond futures with both 5-year and 10-year Chinese government bond futures plunging and hitting limit-downs. Yet, these factors are not root causes. Investors have been selling their highly-leveraged bond holdings as tightened liquidity reduces the spread between long-term and short-term rates; financial institutions also tightened credit issuance to non-financial institutions in the effort to curb their own risks, making cash even scarcer and exacerbating the sell-off.

Within such context, easing acute conditions in bond and money markets has taken priority over steadying the onshore Yuan rate. On the afternoon of December 15th, the PBOC guided commercial banks to provide liquidity to non-financial institutions; the next day, the Central Bank injected a total of 180 billion Yuan through reverse repos and 394 billion Yuan through Medium-term Lending Facilities. Amid supports from the regulator, bond futures rebounded on December 16h.

However, the correction in bond market is not over: both 5-year and 10-year government bond futures dropped once again after the media reported on Monday that the Central Bank will include off-balance sheet wealth management products (WMPs) in evaluating banks’ risks. The move is expected to reduce the demand in bonds as a large proportion of WMPs are invested in bonds. In the following two days, bond futures picked up amid the Central Bank’s continued direct liquidity injections through open market operations and guidance on banks to use X-Repo to add liquidity. X-Repo, little used since it was launched in August 2015, is a system that allows participating financial institutions to match repos and reverse repos offers anonymously with great efficiency. 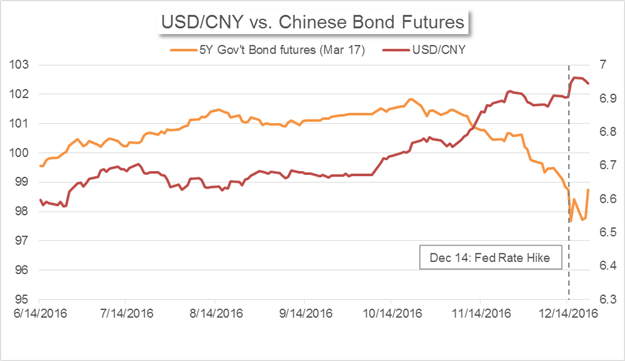 Turbulence is not only seen in Chinese bond market, but also in equity markets. Shanghai Composite Index fell coupled with bond futures on both December 15th and 19th. This may partially result from drops in financial stocks in relate to large institutional bond holdings. It may also indicate that the mood of panic has spread from one market to another amid the liquidity shortage. 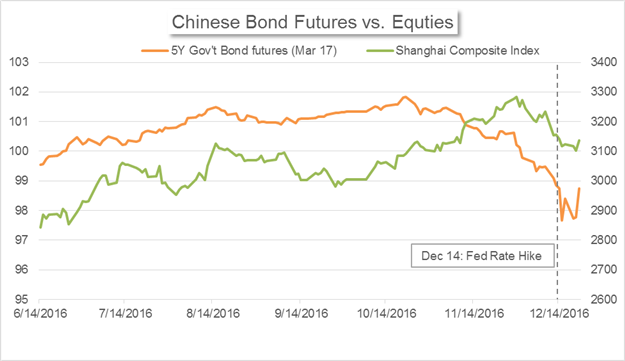 - The Central Bank announced on December 21st that it has issued 50 billion Yuan of RQFII quota to Ireland, which allows qualified Irish institutions to invest in mainland China. As of today, China has approved a total of 1.51 trillion Yuan quota to 18 countries and regions.