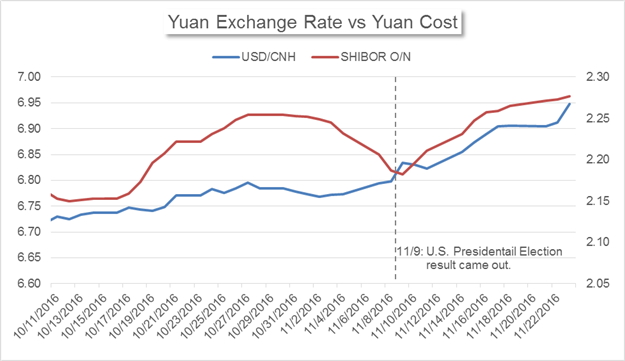 - The USD/CNH quickly climbed above 6.93 and 6.94 on Wednesday amid the Dollar strength.

- Yuan’s ranking in the global payments dropped one position to the sixth in October.

Also, China’s Central Bank has been tightening monetary policy through open market operations. The regulator has been increasing longer-term borrowing over the past few months. In March, all the liquidity provided was through 7-day reverse repos. In April, the PBOC began to add medium-term liquidity through 3-month and 6-month Medium-term Lending Facilities (MLFs). In June, the regulator started to issue 1-year MLFs and continued to increase its weighing in the next few months. In August and September, the PBOC resumed 14-day and 28-day reverse repos to further increase lending terms, in the effort to curb the cheap short-term borrowing that were used to purchase longer-term bonds. 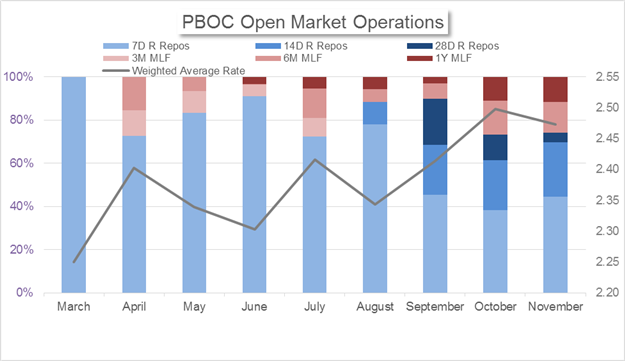 Even though the Central Bank keeps the benchmark interest rates unchanged, the costs of borrowing from it have actually increased: The weighted average interest rate rose from 2.34% in August to 2.50% in October. In November, the rate fell slightly to 2.47% (as of November 23rd). The tweaked credit strategy is mostly driven by the rising risk of asset prices bubbles, which has been seen in multiple Chinese financial markets: first in the bond market, then the property market and the most recent commodity market.

In the 3Q Monetary Policy Implementation report, the PBOC mentioned for the first time that it will “pay attention to curbing asset price bubbles and preventing economic and financial risks”. With this prioritized target, we may see the regulator continue to implement the current monetary policy that is tighter than in early this year.

- Yuan’s proportion in the global payments dropped to 1.67% in October from 2.03% in the month prior, with its ranking falling one position to the sixth, according to SWIFT. Also, the Yuan slipped to the third most-active currency for global trade finance, holding a share of 4.61% and overtaken by the euro.