- The PBOC’s funds outstanding for foreign exchange dropped for the thirteen month in a row in November.

- The PBOC guided the Yuan slightly weaker against the U.S. Dollar on Wednesday ahead of the release of Fed rate decision and economic projections; the Yuan was lowered by -94 pips or -0.14% to 6.9028. At 2:00pm EST, the Fed announced to increase the benchmark rate by 25bp, as expected, and foresee three hikes in 2017. In an immediate response to the release, the USD/CNH jumped, though failed to set a new record, as the decision has been largely priced in. As of 2:50pm EST, the pair has steadied around 6.9152. 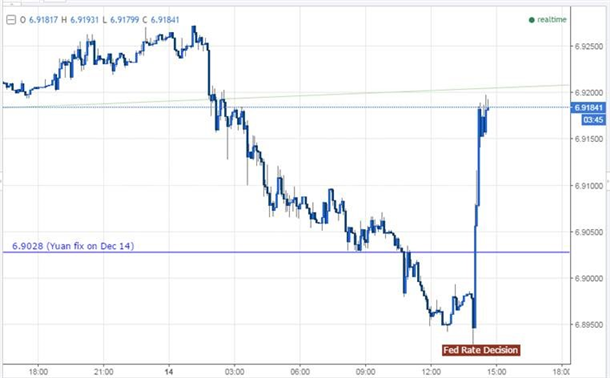 - The PBOC’s funds outstanding for foreign exchange continued to drop in November, making it the thirteenth decline in a row. The total outstanding funds fell -382.7 billion Yuan to 22.2603 trillion Yuan from the month prior. This means that the Central Bank continued to receive declining foreign exchanges from commercial banks. Coupled with dropping foreign reserves in the same month, China still bears considerable capital outflow pressures. As we discussed earlier, the decline will also reduce Yuan injections by the PBOC through exchanging for foreign currencies, and in turn, tighten onshore Yuan liquidity and increase Yuan borrowing costs. 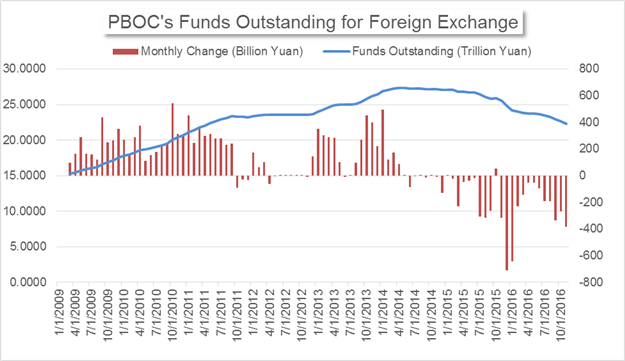 - The gap between the growth in M1 and M2 contracted for the fifth straight month in November, falling to 11.3%. Coupled with an improved private investment print in the month, the narrowed spread indicates that private firms may have found more investment opportunities to spend their cash.

On the other hand, the New Yuan Loans expanded to 794.6 billion Yuan in November; the proportion of home loans soared once again, to 85.5%, indicating the housing sector may still be overheated, despite the fact that Chinese central and local policymakers have been launching numerous tightening measures since October. Within such context, the PBOC is less likely to introduce additional easing programs which may further fuel price bubbles.

- Chinese top policymakers have started the annual Central Economic Work Conference on December 14th and will set an economic plan for 2017. The Conference has been held at the end of every year since 1994 and is the country’s highest-level economic meeting.

Last Friday, Chinese top leaders have set up the tone for 2017 at the Politburo meeting, which is to prioritize economic stability. In the statement released following the meeting, “maintaining stability and then progressing” has been noted as the basic rule and was reiterated three times in the statement. Market participants may seek more detailed definition of stability from the on-going Central Economic Work Conference, for instance, whether it means to stabilize prices – housing, commodities, to stabilize exchange rates, to stabilize capital flows or others.