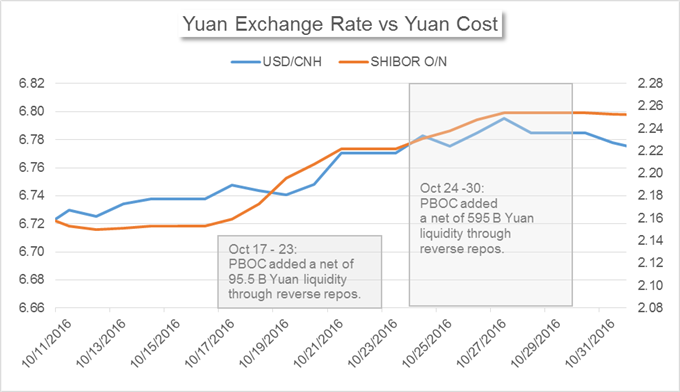 - CICC forecasts that home sales in tier-one and tier-two cities will drop -20% in the fourth quarter.

- The housing prices in 30 Chinese cities in a survey fell -8% in October from the month prior.

Despite the continued reduction in short-term liquidity, the onshore Yuan’s borrowing costs saw declines: the SHIBOR O/N, 1W and 2W dropped -0.42, -0.60 and -0.10 BP on Thursday from a day ago. Normally, when the PBOC removes cash from the market, Yuan’s funding costs would increase.

Over the past two weeks, we have seen such inconsistent moves between short-term liquidity injections and short-term Yuan borrowing costs. The PBOC added a net of 95.5 billion Yuan through reverse repos in the week of Oct 17th to 23rd and 595 billion Yuan in the week of 24th to 30th. However, the short-term SHIBOR remained on an upward trend, which was unusual.

This is likely caused by Yuan exchange rates. The Chinese currency has lost -0.65% against the U.S. Dollar offshore and -0.70% onshore from October 17th to 30th, mostly driven by imminent Fed rate hike expectations. Amid the Dollar advance, Chinese investors and companies show less incentive to sell foreign currencies to commercial banks and eventually reduce the Central Bank’s foreign exchange holdings. As a result, the Central Bank pays less Yuan to commercial banks in exchange of foreign currencies, and this reduces the monetary base for the Yuan.

The total outstanding funds for foreign exchanges held by the Central Bank, a measure of the payment of the Yuan in exchange of foreign currencies, dropped sharply in September. This means that Yuan’s liquidity provided by the Central Bank through purchasing foreign exchanges has reduced. With drops in Yuan liquidity, the cost of funding Yuan in the onshore market increases, despite Yuan’s weakness against the Dollar. The PBOC adding cash through short-term reverse repos is more a response to the rising borrowing costs, rather than a cause.

- China International Capital Corp (CICC), a leading investment service company, said in a report that property sales in tier-one and tier-two cities are likely to fall -20% in the fourth quarter and drop additional -40% in the first half of 2017 on an annualized basis. CICC also forecasts that the Chinese government will continue to curb capital flows to the housing sector and strengthen oversight on home purchases until both housing prices and investment in real estate see significant decreases.

- The housing prices in 30 Chinese cities in a survey conducted by Shanghai E-house Real Estate Research Institute dropped -8% in October from the month prior; new home sales in tier-one cities fell -3.3% on average. In specific, new home sales declined -19.7% in Beijing and -16.1% in Shanghai, while increased +5.1% in Guangzhou and +52.9% in Shenzhen. The Research Institute forecasts that real estate prices and sales will continue to drop amid tightened regulations.