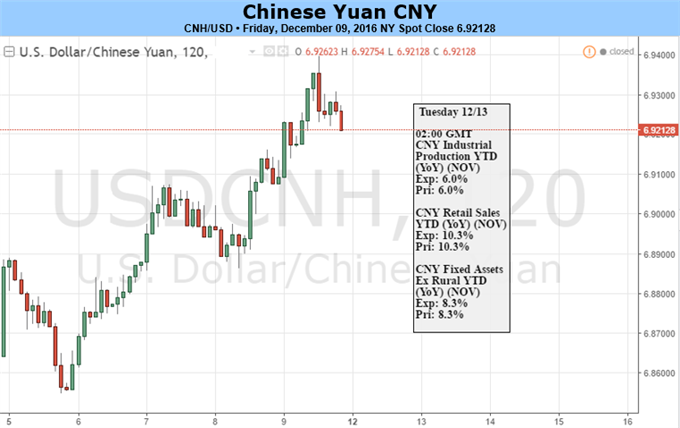 Both the offshore and onshore Yuan resumed descent against the U.S. Dollar this week. The USD/CNH tested a major resistance level of 6.9354 (361.8% extension of the previous major move), though failed to break the level. The USD/CNY climbed above 6.8900, the 2008 high. The Yuan fix, set by the PBOC, was on a bumpy road with both ups and downs during the week. On Friday, the Central Bank weakened the Yuan against the Dollar by -0.35%, the largest daily drop since October 21st. Looking forward, the dominated driver for Dollar/Yuan pairs will be FOMC’s announcements to be released on December 14th. With 100% probability of a 0.25% rate hike according to Fed fund futures, the rate decision may have been already priced into the Dollar; however, Fed’s update on economic projections could bring significant volatility to the FX market.

The trading in Dollar/Yuan futures and forwards reveals two things so far: A) Fed’s rate hike decision has been largely priced into Dollar/Yuan pairs. In Hong Kong Stock Exchange (HKEX), the USD/CNH futures to be matured on December 16th, two days after the Fed’s meeting, was quoted at 6.9327, as of 12:30 PM EST on Friday, while the USD/CNH spot rate was trading at 6.9283. The numbers themselves do not matter that much but we can see the spread between the spot and futures was quite small, only 44 pips. For the onshore Yuan, the Dec-20 USD/CNY forwards was quoted at 6.9199 (the average of the bid and ask) according to Bloomberg, while the spot rate was trading at 6.9041. A larger spread between the spot and forward USD/CNY could be partially caused by the lower liquidity in forwards compared to futures. Futures are standard contracts that could be traded at exchanges; forwards are private agreements between two parties and traded over-the-counter.

This does not mean that the upward trend is unchangeable. A switched tone from the Fed on the economic outlook may greatly impact expectations on the frequency of interest rate increases in 2017, and in turn, weigh on Dollar pairs including Dollar/Yuan pairs. As a result, traders will want to keep a close eye on any update in Fed’s economic projections to be published on December 14th, coupled with the rate decision. In the imminent term, the 361.8% extension levels will be key resistance for both Yuan pairs: 6.9354 for the USD/CNH and 6.9279 for the USD/CNY.