- Yuan deposits in both Hong Kong and Taiwan dropped in October amid the Yuan weakness against the Dollar.

- A leading coal index shows declines over the past few weeks; yet, coal prices remain at relative high levels.

- The PBOC strengthened the Yuan by +24 pips or +0.04% against the U.S. Dollar to 6.8865 on Wednesday, the third increase in a row. The Central Bank’s guidance may have weighed more on Yuan pairs than the Dollar strength on the day: As of 2:40PM EST, the offshore Yuan lost slightly against the Dollar by -0.08% and the onshore Yuan gained +0.14% despite that the Dollar Index (DXY) rose +0.60% over the same span of time. 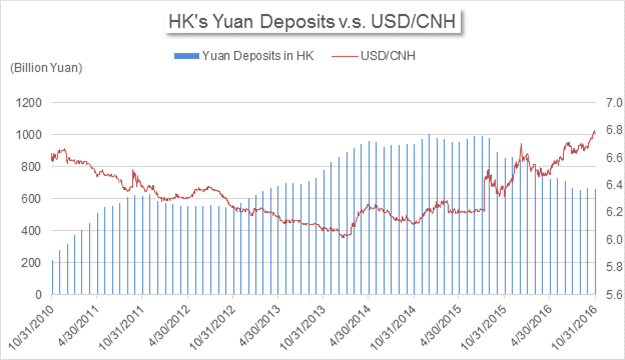 In Taiwan, Yuan deposits also declined in October following two months of increases. The Yuan deposits dropped by 3.30 billion Yuan to 308.53 billion Yuan from the month prior. Among global payments and settlements, Yuan’s share and rank both fell in October, likely driven by the Yuan weakness against the Dollar as well.

- China’s central government will refund a fixed amount of value-added taxes (VAT) to local governments beginning in 2016, according to an announcement released by the State Council on November 29th. The refund aims to support local governments’ fiscal income amid tax cuts through the introduction of VAT. From May, when the VAT replaced the business tax, to the end of October, the total taxes reduced hit 96.5 billion Yuan. It is expected that the total tax cuts will reach 500 billion by the end of 2016. Reducing taxes is one of the measures following China’s proactive fiscal policy, which is designated to promote the economy.

- As of the end of October, the PBOC has maintained a net short position of $45.3 billion foreign currencies against the Yuan in futures and forwards from the month prior. In September, the Central Bank’s position changed for the first time since the regulator began to report this kind of data in March. As the Central Bank works as the final counterpart to Chinese companies, the unchanged position of the Central Bank indicates that private companies may hold steady on their hedging positions despite of the elevated volatility seen in Dollar/Yuan rates recently.

- Bohai-Rim Steam-Coal Price Index (BSPI), a leading indicator for Chinese coal prices, dropped -0.33% to 599 Yuan/ton in the period of November 23rd to 29th from the previous session. This is the fourth decline in a row as Chinese regulators have been implementing a series of measures to cool the red-hot market.

However, the coal prices are still at relatively high levels: four main state-owned electric utility enterprises have submit a joint request to increase electricity prices as they are not able to cover their costs due to the recent rally in coal prices. Guotai Junan Securities told that if the coal prices remain at such high levels, Chinese coal-fired power plants will suffer from major losses in the fourth quarter.