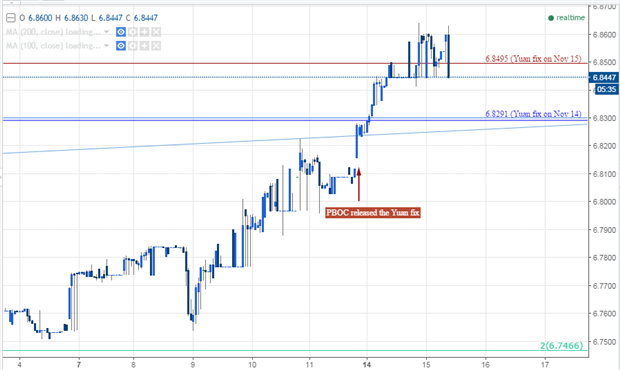 - The onshore Yuan fell to its lowest level against the U.S. Dollar in nearly 8 years on Tuesday.

- The National Development and Reform Commission approved a series of projects in the effort of boosting private investment.

- The onshore Yuan fell to its lowest level against the U.S. Dollar in nearly 8 years on Tuesday amid the continued Dollar strength, with the USD/CNY hitting 6.8640. Yuan’s drop followed the PBOC setting the daily reference rate to the weakest level since 2008: In the Asian morning session, the Yuan fix was lowered by -204 pips or -0.30% to 6.8495. The Central Bank has guided the Yuan to weaken against the Dollar for eight consecutive trading days.

We discussed that with external forces and internal tolerance, the Yuan will likely continue to devalue against the Dollar. On Tuesday, the offshore Yuan extended losses against its U.S. counterpart as well, with the USD/CNH touching the new record high of 6.8767 in the early portion of the New York session. 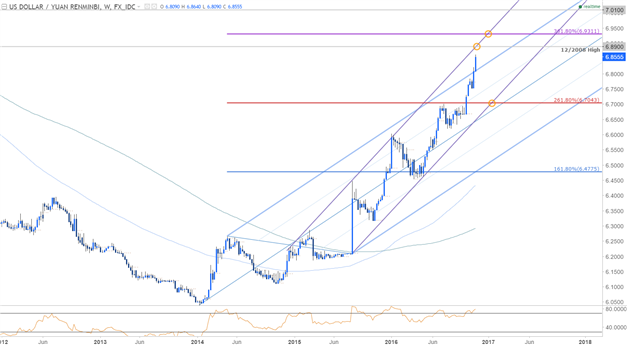 - China’s fiscal income in October increased +5.9% to 1.536 trillion Yuan on an annualized basis; fiscal expenditure dropped -11.3% to 1.182 trillion Yuan. According to Shenwan Hongyuan Securities, the central government may face increasing pressure on income from reduced real estate taxes due to recent tightened regulations. Over the following two months, the imbalance between income and expenditure may get worse and therefore, the government will need to either increase the deficit ratio or increase revenue from other sources.

- China’s Development and Reform Commission approved a new railway project worth 64 billion Yuan. This is the ninth transportation infrastructure project that received a green light from the regulator. The total investment of the newly approved projects in November exceeded 260 billion Yuan. These projects provide opportunities for Chinese private companies to spend their excessive cash. The growth of Chinese private investment dropped to 2.1% in the first seven months of 2016 from a peak level of 28.9% in 2012. The gauge started to improve in September and October but still remained at low rate, below 3.0%; investors are in short of investment opportunities rather than funds. Within such context, the introduction of national infrastructure projects may help to support the growth of private investment.