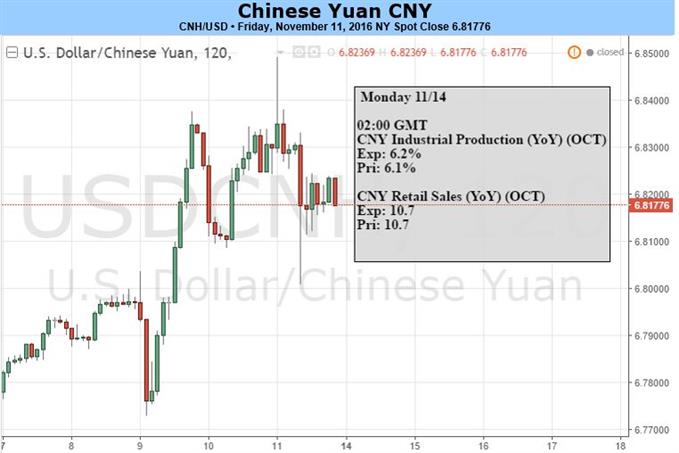 The Yuan resumed losses against the U.S. Dollar this week following bounces in the last week. Both the offshore and onshore Yuan have hit fresh records: the USD/CNH touched 6.8495 on Friday, setting a new all-time low for the offshore Yuan; the USD/CNY reached 6.8225, the weakest level for the onshore Yuan since June 2010. Also, the PBOC has been weakening the Yuan fix for five consecutive days this week; the guided rate dropped to a six-year low of 6.8115 on Friday. Looking forward, the Yuan will still bear considerable downward pressure amid the U.S. Dollar strength after the U.S. presidential election. At the same time, China is facing a series of issues: a liquidity shortage, drops in foreign reserves, contractions in exports, the risk of housing price bubbles, the overheated commodity market and defaults by state-owned enterprises. Within such context, supporting the Yuan against the Dollar may not be the priority for Chinese regulators. This means that the Yuan is likely to continue to drop against the Greenback amid external forces and domestic tolerance.

The U.S. Dollar was on a roller-coaster ride driven by the U.S. presidential election this week. Trump’s win came as a major shock to many market participants who had priced in a December Fed rate hike. This fueled waves of risk aversion in the first few hours following the release, with the implied probability of Fed raising rates next month dropping to below 50%. As a consequence, the Yuan strengthened against the Dollar. However, as investors digested Trump’s fiscal policy, the Dollar began to recover and eventually erased early losses and managed gains against the Chinese Yuan. The odds of the December Fed rate hike picked up as well, increasing to 84% as of 12:20pm EST on Friday. With the Fed rate hike bets back on the table, the Chinese Yuan may continue to weaken against its U.S. counterpart in the coming sessions.

On China’s side, regulators are less likely to support the Yuan much despite of the downward pressure due to two reasons. One, the country’s foreign exchange rate target is to maintain the Yuan basically stable against a basket of currencies, rather than to the Dollar. Two, Chinese regulators have prioritized other issues. The balance between providing ample liquidity and curbing asset price bubbles has becomes increasingly challenging. On one hand, the outstanding funds for foreign exchange held by China’s Central Bank, a source of Yuan liquidity, has been declining sharply due to drops in PBOC exchanging the Yuan for foreign currencies. We have seen that when Yuan weakened against the Dollar, the funding cost of the onshore Yuan actually increased and the Central Bank had to expand Yuan injections. On the other hand, when adding the liquidity, the Central Bank has been careful not to let the cash flow into the housing market where the risk of asset bubbles is already high.

In the 3Q Monetary Policy Implementation Report, the PBOC has made it clear that in order to meet the liquidity shortage led by declines in the outstanding funds for foreign exchanges, it will primarily rely on open market operations and medium-term lending facilities over the following periods; adjusting reserve requirement ratio (RRR) will be a dose too high for the economy to bear right now. At the same time, the months-long rally in housing prices in the first-tier and the second-tier cities has not been fully tamed yet. The home loans issued in October was 433.1 billion Yuan, taking up 66.5% of the total new Yuan loans, following 47.1% in September, 71.2% in August and 98.7% in July. This means that a large amount of cash has flowed into the housing market despite of numerous tightened rules over home loan issuance.

The housing sector is not the only one in risk of price bubbles; Chinese commodity futures prices have hit fresh records on an almost daily basis over the past weeks. The National Development and Reform Commission (NDRC) and three main commodity exchanges have taken a series of measures this week in the effort to bring down the soaring commodity prices, as regulators believe that the rally is driven by excessive speculation and not justified by fundamentals. With half of the economy feeling too cold (in short of cash) and the other half feeling too hot (price bubbles), finding the right temperature (the amount of liquidity) has been set as a priority by China’s Central Bank.

Within such a background, supporting the Yuan against the Dollar is likely to further complicate the existing issues as it will require to burn foreign reserves, impacting the onshore Yuan liquidity. In the short-term, Dollar moves will be the key driver to Dollar/Yuan rates. The offshore USD/CNH has broken the key resistance of 6.8108, which becomes the new support to keep an eye on. For other technical levels, read the chart created by our Currency Strategist Michael Boutros.