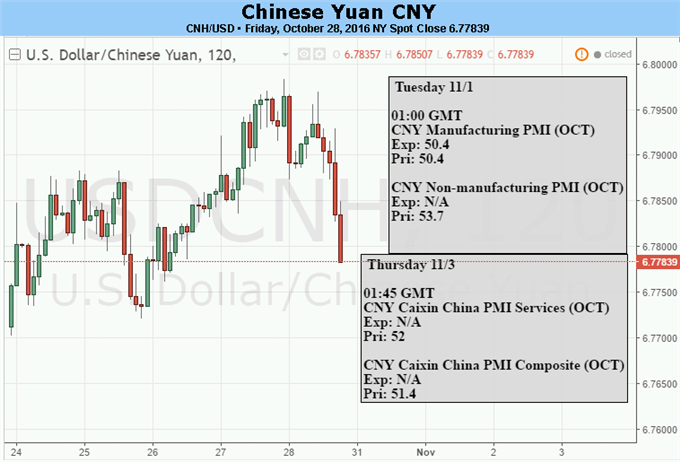 The offshore Yuan dropped to record lows this week, with the USD/CNH touching 6.7984 on Friday. The onshore Yuan extended losses against the U.S. Dollar as well, with the USD/CNY hitting 6.7843, the lowest level since September 2010. The PBOC weakened the Yuan against the Greenback to 6.7858 on Friday, setting a fresh six-year low. Looking forward, Yuan rates may still bear downward pressure amid the Dollar strength driven by imminent Fed rate hike expectations. Also, as the Yuan has remained basically stable against a basket of currencies, the PBOC may continue to allow the Yuan to move in response to market pressure.

The U.S. GDP accelerated to 2.9% in the third quarter from 1.4% in the previous one and exceeded expectations of 2.6%. The economic rebound may not necessarily make a difference for next week’s FOMC meeting, with the U.S Presidential elections in less than a week later; the odds of a November rate hike was 17%, still relatively low. However, market players widely expect a December rate hike, with a probability of 74%. On the other hand, the Chinese economy steadied in the third quarter, expanding 6.7% as what were seen in the first two quarters. Amid the risk of housing price bubbles and high leverage in the financial system, China’s Central Bank has maintained a prudent monetary policy and tightened regulations on banks’ lending. Within such context, the Chinese Yuan will likely face additional pressure to devaluate against its U.S counterpart.

Also, despite Yuan’s losses to the Dollar, the Chinese currency has maintained relatively stable against a basket of currencies, which meets China’s exchange rate target. As long as this target is satisfied, the Central Bank may continue to let the Yuan move in response to market pressure, which leaves room for the Dollar/Yuan to advance further. The regulator watches three Yuan indexes that measure Yuan’s value against a currency basket. The prints for this week will not be available until next Monday, but we can conduct some simple calculations to get a rough idea of Yuan moves against a basket of currencies. The four currencies, the U.S. Dollar, the Yen, the Pound and the Euro, take up the largest proportions in all three Yuan Indexes: 66.33% in CFETS, 53.50% in BIS Yuan Index and 100% in SDR Yuan Index. We can take a look at Yuan moves against these major currencies.

As of 10:30pm EDT, the offshore Yuan (CNH) gained +1.16% and +0.25% against the Yen and the Pound, while lost -0.78% and -0.30% to the Euro and the Dollar respectively this week. After applied weightings of the four currencies used in CFETS Yuan Index, BIS Yuan Index and SDR Yuan Index, the offshore Yuan moved -0.06%, -0.03% and +0.27% respectively against a portfolio of the four selected currencies. This shows Yuan’s stability against a currency basket over the past week. Also, from October 1st to 21st, the Yuan dropped -1.40% against the U.S. Dollar in the offshore market and -1.46% in the onshore market; over the same span of time, the CFETS Yuan Index, BIS Yuan Index and SDR Yuan Index gained +0.20%, +0.29% and +0.69% respectively. On Tuesday, the Deputy Governor of PBOC, Yi Gang, commented on Yuan rates and reiterated that “there is no basis for a persistent Yuan devaluation”. This more likely refers to Yuan’s stability against a basket of currencies rather than in a single pair. Therefore, Dollar/Yuan rates could climb higher in the coming week.