- The USD/CNH hit above 6.7850 on Monday, setting a new record low level for the offshore Yuan.

- The Yuan weakened against a basket of currencies last week, leaving reduced pressure on Dollar/Yuan rates.

- The offshore Yuan broke the record low of 6.7850 seen in September 2010 on Monday, with the USD/CNH touching 6.7879 during the early portion of the New York session.

The PBOC weakened the Yuan by -132 pips or -0.195% against the U.S. Dollar to 6.7690 in the Asian session. Within one hour following the release of the reference rate, the offshore Yuan dipped -0.14% against the Dollar, with the USD/CNH just 1 pips away from the September-2010 low. During the same span of time, the onshore Yuan lost -0.14% to the Dollar as well, with the USD/CNY touching 6.7747, the lowest level for the onshore Yuan in six years. As the PBOC’s tolerance grows, the Yuan may hit new lows in both onshore and offshore markets over the following periods. 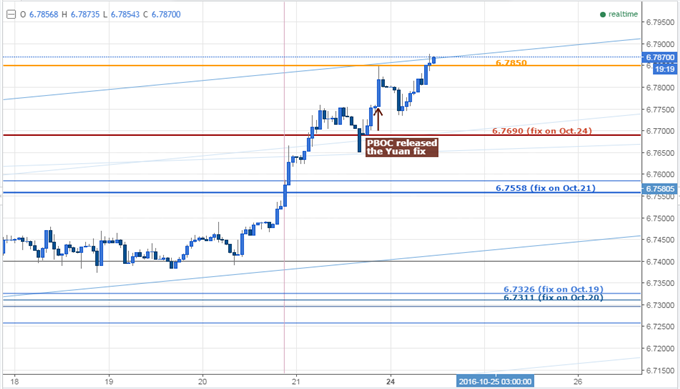 The next key level for the USD/CNH is 6.8108, the 200% retracement of the decline from the July high. Also, according to our Currency Strategist Michael Boutros who is specialized in technical levels, the offshore Yuan pair may find some near-term resistance around 6.7793. 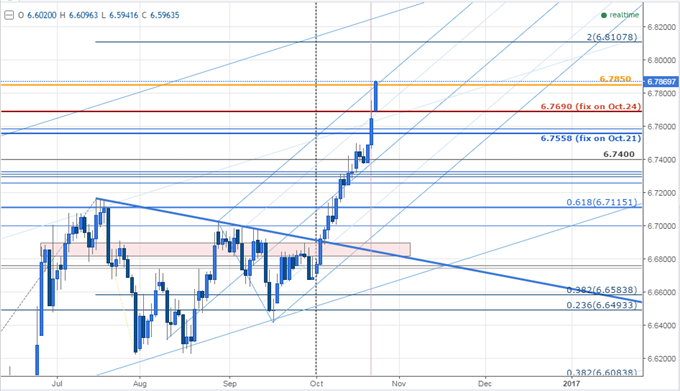 In terms of the Yuan against a currency basket, all three Yuan indexes dropped over the last week. The CFETS Yuan Index, BIS Yuan Index and SDR Yuan Index fell -0.34%, -0.33% and -0.09% respectively to 94.30, 95.01 and 95.77 last Friday from a week ago. Yuan’s weakness against a basket of currencies may reduce the imminent pressure on Yuan rates against the U.S. Dollar coming from a need of re-balancing the basket. 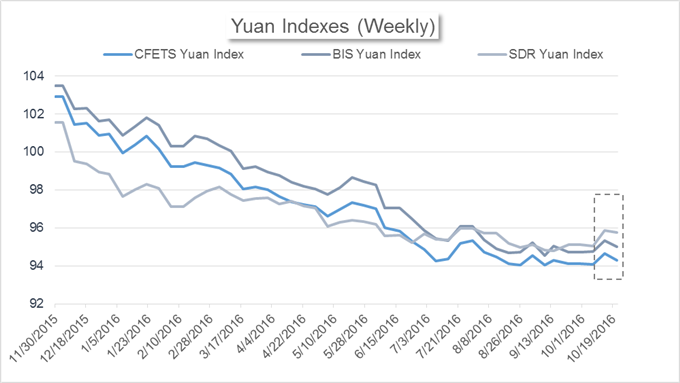 - China Banking Regulatory Commission, the banking regulator, announced to tighten regulations on real-estate trusts and banks’ wealth management products (WMP) in the effort to curb credit to the property sector last Friday. In the first half of 2016, 13.06% of funds from WMP, worth 2.09 trillion Yuan, has entered the real estate sector, according to a report issued by China Central Depository & Clearing. Also, 47.1% of new lending issued by banks in September has flown into the property market. The flood of credit has been driving up the housing prices in tier-one and tier-two cities, increasing the risk of price bubbles.