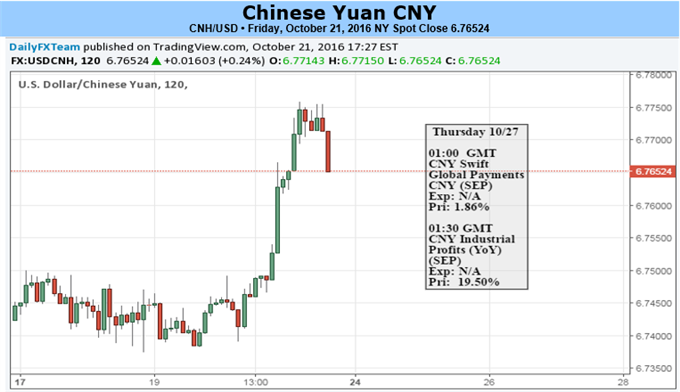 Both the offshore and onshore Yuan dropped to six-year lows on Friday: The USD/CNH hit 6.7756 and the USD/CNY touched 6.7635. The fast-rising Dollar/Yuan pairs were mostly driven by the Dollar strength of late. Major currencies have lost against the Greenback, with -2.7% in the Yen, -3.1% in the Euro and -5.6% in the Pound since October. Over the same span of time, the Yuan dropped -1.5% against the Dollar in offshore markets and declined -1.4% in the onshore market.

Also, Chinese policy makers have shown intention to promote a market-driven exchange rate, by allowing the Yuan to devalue against the Dollar in response to market pressures. The PBOC weakened the Yuan’s daily reference rate to 6.7558 on Friday, the lowest level since August 2010. Within such context, Yuan moves next week may largely depend on drivers from its counterpart. A heavy calendar is dotted with U.S. labor, consumption and sales figures for September, as well as the big ticket item – the third quarter (3Q) GDP report.

China’s foreign exchange regulator (SAFE) responded regarding recent moves in Yuan rates and China’s capital flows on Friday. Wang Chunying, the spokeswoman of SAFE, told that despite Yuan’s weakness against the U.S. Dollar, it has strengthened against a basket of currencies since October. The CFETS Yuan Index, BIS Yuan Index and SDR Yuan Index, measures of the Yuan against a currency basket, rose +0.2%, +0.2% and +0.8% respectively in October, according to SAFE. China’s current exchange rate target is to maintain the Yuan stable against a basket of currencies, after the Chinese currency was de-pegged against the U.S. Dollar on August 11, 2015. Because of this, the Yuan may bear additional pressure from currency basket re-balancing.

In terms of Yuan’s recent losses against the U.S. Dollar, Ms. Wang said that it was driven by expectations of imminent Fed rate hike; it is normal for the Yuan to fluctuate in the short-term due to external factors and the moves are within ‘an explainable range’. Also, she told that China’s capital outflows have seen slowing down in September. Wang’s comments indicate that the Chinese regulator is less likely to draw a red line for Yuan rates in the near-term amid the Dollar advance. This means that the USD/CNH and the USD/CNY could set fresh highs over the following periods.

In terms of next levels, the offshore Yuan is 0.13% away from the all-time low level of 6.7850 seen in September 2010 and is 0.80% away from the level of 6.83, at which the onshore Yuan was pegged against the U.S. Dollar from 2008 to 2010. A key technical level is 6.8108 which is the 200% retracement of the decline from the July high. Also, as Yuan rates approach these record-low levels, there will be fewer historical levels to reference; the PBOC’s guidance could weigh more on the Yuan, and thus, is worth to continue to keep a close eye on.