AUD/USD, NZD/USD Climb as Japanese Yen and US Dollar Sink

The sentiment-linked Australian Dollar and similarly-behaving New Zealand Dollar soared against their major counterparts on Thursday. This was at the expense of the anti-risk Japanese Yen and haven-linked US Dollar. A rosy mood in stock markets, fueled by hopes of a Brexit deal, could have been the source of optimism from investors as the S&P 500 closed 0.28 percent to the upside.

During European trading hours, European Commission President Jean-Claude Juncker and UK Prime Minister Boris Johnson announced that a Brexit deal has been reached. However, optimism receded after officials from the Democratic Unionist Party (DUP) saying that they would not support Johnson’s agreement. Their support is crucial for Mr Johnson to pass his deal in Parliament perhaps on Saturday.

Still, the British Pound and Euro aimed nervously higher despite giving up some losses. Disappointing economic data out of the United States also likely fueled their gains against the US Dollar. Local industrial production unexpectedly declined 0.4 percent m/m in September versus -0.2% anticipated. US front-end government bond yields traded lower as markets kept their hopes up for further Fed easing.

Ahead, the Australian Dollar will be closely watching incoming third quarter Chinese GDP data after rosy local jobs data offered AUD/USD a boost. Data out of China has been tending to underperform relative to economists’ expectations, opening the door to a continuation of the trend. As a China-liquid proxy, the Aussie could reverse recent gains should weakness in growth from a close trading partner spread slowdown fears.

Join me later today at 1:45 GMT for LIVE coverage of China GDP where I will be going over the reaction in the Australian Dollar!

Meanwhile, the Japanese Yen will likely look past a set of local CPI data due to its limited implications for near-term BoJ policy action. Rather, it may focus more on China GDP and the mood in regional stock exchanges. S&P 500 futures are little changed with a slight downside bias heading into Friday’s APAC session. A bittersweet mood from investors may boost the Yen.

The USD/JPY could be in the process of carving out a rising wedge candlestick formation. This is typically a reversal pattern and if so, may down the road open the door to downtrend resumption - as outlined in my Q4 USD/JPY forecast. As such, the latest test of the ceiling of the Rising Wedge may pave the way for a test of the floor which goes back to the end of August – red area on the chart below. 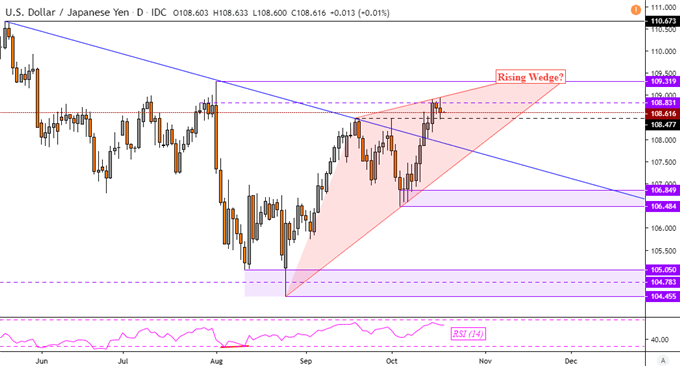