The New Zealand Dollar rose in morning Wednesday trade after a round of rosy local inflation data crossed the wires. In the third quarter, New Zealand CPI clocked in at 1.5 percent y/y versus 1.4% expected, though down from 1.7 in Q2. That was also the softest pace since Q1 2018. Quarter-over-quarter, inflation accelerated 0.7% versus 0.6% anticipated and prior.

New Zealand front-end government bond yields climbed, signaling fading dovish RBNZ expectations. Though that wasn’t enough to significantly dent November rate cut bets. According to overnight index swaps, odds that the central bank could deliver a 25bp cut next month stand at about 93 percent probability. It will likely take more welcoming news, especially on the external front, to push those down further.

Over the past 24 hours, the British Pound and risk trends received a boost on the latest Brexit developments. Reports crossed the wires that both the UK and the EU were closing in on a draft withdrawal deal. An orderly exit from the EU - which lifts intense uncertainty and economic consequences of a hard “no-deal” Brexit - is a much welcome sign for not just Sterling, but also for fragile markets amid a global slowdown.

Speaking of which, the International Monetary Fund released its latest report on the outlook for world economic expansion. The IMF anticipates global growth to come in at just 3.0 percent this year, the softest pace since the Global Financial Crisis about a decade ago. In the near term, markets seem to be prioritizing hopes of a Brexit deal which are still not guaranteed.

In fact, the British Pound is aiming cautiously lower heading into Wednesday’s Asia Pacific trading session. This is after the Democratic Unionist Party (DUP) mentioned that gaps remain and that more work “is required” on a Brexit deal. UK Prime Minister Boris Johnson and his government are over 40 seats short of a majority, meaning reconciling the lingering Irish Border issue hinges on support from the DUP.

Check out our special report outlining the importance of the Irish Backstop to Brexit talks!

Some of the lift in sentiment after Wall Street ended the day higher has tapered off with S&P 500 futures now aiming cautiously lower. This could pave the way for a bittersweet session for APAC equities. Should the Nikkei 225 pare an upside gap, that may boost the anti-risk Japanese Yen against the sentiment-linked Australian Dollar. This is as AUD/JPY could be on the verge of extending its dominant downtrend.

On the whole, after the New Zealand CPI report, NZD/USD still remains in directionless trade ever since finding a bottom around 2015 lows. This also means that the break above descending resistance from July has failed to see much upside follow-through. Keep a close eye on price signals from IG Client Sentiment which are offering a mixed NZD/USD outlook at the moment. 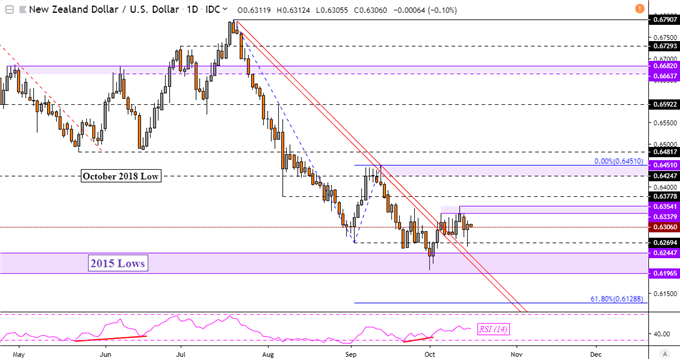