AUD, NZD, Brace for Risk Aversion as JPY May Gain

Asia Pacific markets initially had a rosy session to look forward to after the S&P 500 rallied almost 1.9% on Thursday. That was the best day for Wall Street since early June as markets viewed efforts from China to stabilize the Yuan as a sign of de-escalating trade tensions with the United States. However, these hopes are now looking to be short-lived again. The pro-risk Australian and New Zealand Dollars are at risk.

Shortly after Wall Street close, the White House announced that it is holding off on its decision to grant companies licenses in order to resume doing business with China’s Huawei. The company is the nation’s largest provider of telecommunication equipment. This is in response to threats from Beijing to halt importing US agricultural goods.

In addition to the US threat of an extra $300b in Chinese import tariffs come September, the decision on Huawei is another step towards unwinding the trade truce the two countries agreed to at June’s G20 Summit. With that in mind, markets still have to contend with the threat of trade wars clouding the global economic outlook. There is also the risk that the US raises the tariff rate against China from 10% to 25%.

The pro-risk Australian Dollar is also eyeing commentary from RBA Governor Philip Lowe and then the latest Chinese CPI data. The former can further pressure the currency if the central bank chief adds fuel to near-term rate cut expectations. USD/JPY will also likely focus more on market sentiment as the Yen looks past Japanese second quarter GDP data due to its limited implications for BoJ monetary policy bets.

With that in mind, USD/JPY appears to be making another attempt to resume the dominant downtrend from April as it eyes near-term support at 105.50. Further Yen gains may eventually see USD/JPY retest the January “Flash Crash” low at 104.78. Otherwise, turning higher has resistance as a psychological barrier between 106.78 and 107.21. 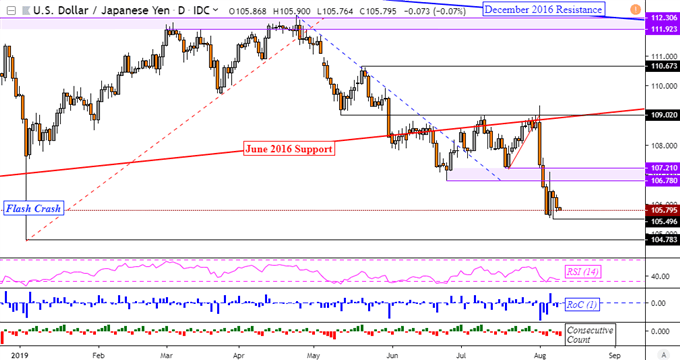