Yen to Rise as AUD/USD Sinks, Will US Raise China Tariffs to 25%?

In just a little over four trading days, the S&P 500 has wiped out upside progress that it had accumulated over the course of roughly two months. Financial markets find themselves consumed by aggressive risk aversion amidst the sudden and quick escalation in trade tensions between the world’s largest economies: the United States and China. Ahead, the anti-risk Japanese Yen could appreciate.

The latest update may see Asia Pacific markets trade sharply lower, extending recent declines. During early Tuesday morning trade, China’s Commerce Ministry confirmed that the nation is to suspend US agricultural product imports. This is in response to the additional $300b tariff threat that President Donald Trump laid out last week which according to the Commerce Ministry, violates the G20 Summit trade truce from June.

Shortly before this crossed the wires, the United States Treasury Department labeled China as a currency manipulator. We also saw the Offshore Yuan (CNH) depreciate on the update, increasing the risk of a self-fulfilling prophecy loop where further accusations are accompanied with more declines in the Yuan. On Monday, we saw China devalue USDCNY past the critical 7.00 level.

White House Trade Adviser Peter Navarro has already commented that the nation is able to use “countervailing measures” against China. This has sparked fears that the US could raise the tariff levy rate on Chinese imports from 10% on roughly $300b goods to 25%. Looking at the chart below, S&P 500 futures are pointing sharply lower which may lead to similar selling pressure in the Nikkei 225 ahead. 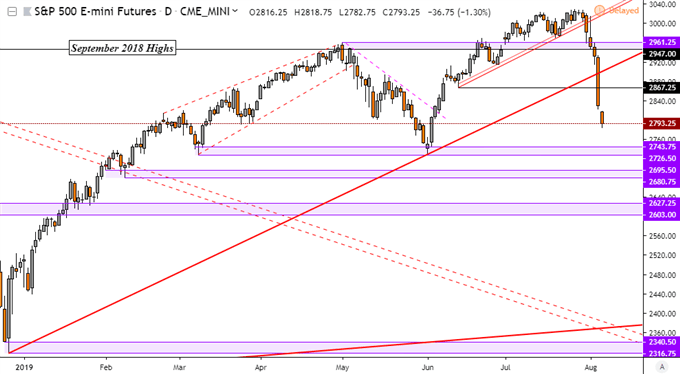 In addition to these vulnerabilities for the sentiment-linked Australian Dollar, it also has the RBA to contend with. While markets are not envisioning a rate cut at this meeting, the central bank could very well lay out the path for further easing given the uncertainties to the global growth narrative. The Reserve Bank of Australia has already cut rates twice this year.

Join me at 4:15 GMT as I cover the RBA rate decision and take a look at what’s in store for AUD/USD ahead!

Taking a closer look at AUD/USD on the daily chart below, the currency pair finds itself sitting right on top of March 2009 lows. This follows confirming a break under key support range (0.6827 – 0.6865). A more-dovish RBA could pave the way for further declines as it also takes out the “flash crash” lows from earlier this month. 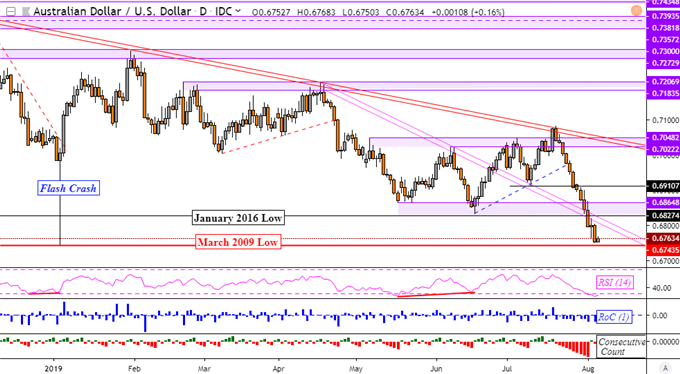