The British Pound was the worst-performing major on Wednesday, sinking with weakness in UK front-end government bond yields. As has been the norm, Brexit-related news flow seemed to be behind Sterling’s decline. Over the past 24 hours, rising concerns over a cross-party EU-UK divorce deal appeared to be the source of pessimism.

Then later in the day we heard from David Lidington, Theresa May’s Deputy, that negotiations with the opposition Labour Party have been ‘difficult’. Weakness in GBP/USD as of late is in stark contrast to what we saw last week. There, disappointing outcomes in local elections boosted the British Pound as it stoked greater urgency that the two parties could come together for a deal sooner, helping to alleviate uncertainty.

On the flip side of the spectrum, the anti-risk Japanese Yen outperformed as anticipated. This comes as the VIX ‘fear gauge’ broke higher amidst rising concerns that the US and China might fail to come to a trade agreement by Friday. Overall, Wall Street ended the day mixed despite China noting that it is prepared to take countermeasures if the US raises tariffs on Chinese imports from 10% to 25% on about $200b in goods.

With that in mind, taking the extreme ends of Wednesday’s performance in FX resulted in GBP/JPY passing through a key support range just under 143.79. With confirmation, this may open the door to testing the next psychological barrier between 141.51 and 140.69. You may follow me on Twitter @ddubrovskyFX for more timely updates on how trade wars may impact GBP/JPY and FX. 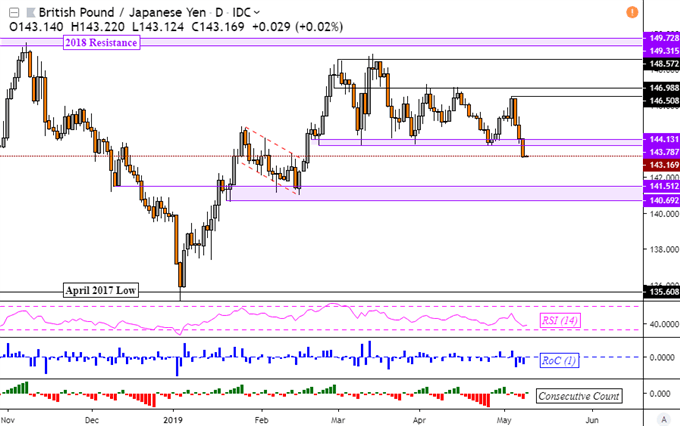 That S&P 500 futures are little changed, though pointing lower, and judging by the performance on Wall Street suggests that markets have not entirely lost hope of a trade deal between the world’s largest economies. As we approach the end of the week, high levels of volatility are still expected with the VIX being elevated compared to yesterday’s upside surge.

As such, the anti-risk Japanese Yen still stands to gain further ground as the USD/JPY downtrend accelerates. With both the RBNZ and RBA now behind us, the pro-risk Australian and New Zealand Dollars may find themselves more susceptible to swings in equities. With that in mind, the risk of a breakdown in US-China trade talks will probably leave upcoming Chinese CPI data on the sidelines.

Meanwhile on the next chart, traders have been piling into long USD/JPY positions which is offering a stronger bearish-contrarian trading bias. Traders are further net-long than yesterday and last week. If you would like to learn more about using sentiment and market conviction to analyze prevailing trends in currencies, equities and commodities, tune in each week as I discuss these on Wednesday’s at 00:00 GMT. 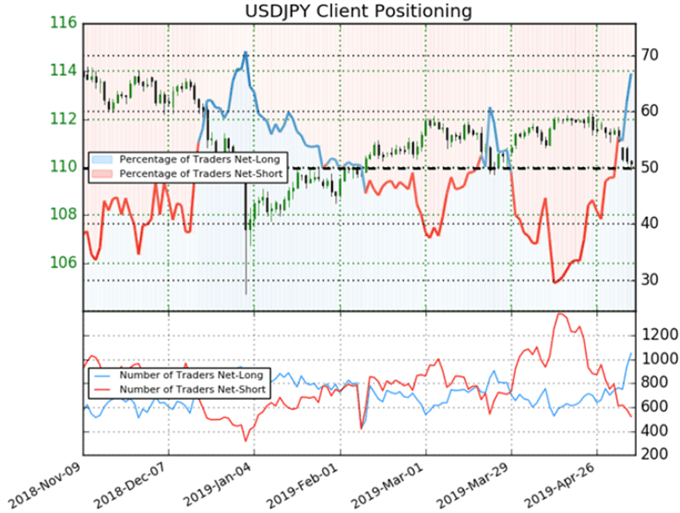