GBPUSD Uptrend Extends on Pressure for a Brexit Deal, Yen May Fall

The British Pound easily took the spot as the best-performing major on Friday, experiencing a sudden burst of gains towards the end of the day. Puzzlingly, a clear catalyst seemed absent. Taking a look at the immediate chart below, we can see that GBP/USD gains accelerated once the last major event risk had passed ahead of the weekend, US ISM Non-Manufacturing PMI (which followed the jobs report). 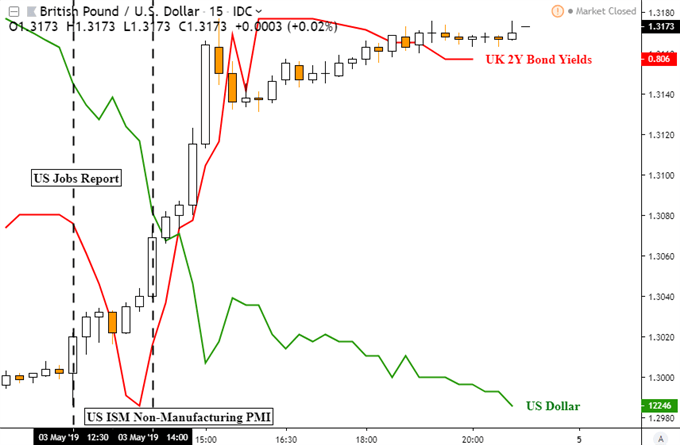 Meanwhile, we know that earlier in the day the UK Conservative and Labour Parties lost seats in local elections, perhaps because of frustrated voters due to Brexit being delayed until October. On Thursday, Sterling largely brushed aside a hawkish Bank of England rate decision given the uncertainties of Brexit.

Perhaps the local elections served as a wake up call for both parties to reach an agreement on Brexit as soon as possible. This can boost the odds of a BoE rate hike and make GBP a relatively attractive currency in the context of a neutral Fed and what could be rate cuts from the RBA and RBNZ this week.

With that in mind, GBP/USD had its best day since March as the pair rose above the trend line that guided it higher from December to the middle of March. This also comes after clearing the near-term falling resistance line from March which sets GBP/USD up for another retest of the psychological barrier between 1.3363 and 1.3301 next. 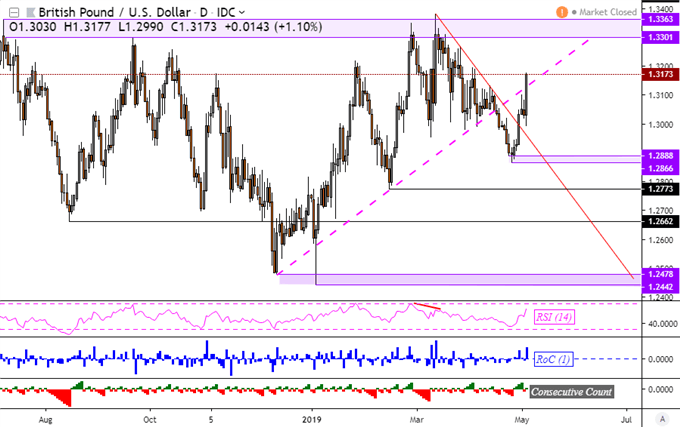 There may be some market optimism to be had at the start of this week if Asia Pacific equities follow Wall Street higher. There, the S&P 500 saw gains in the aftermath of a mixed jobs report. While the nation added more jobs than expected and the unemployment rate ticked lower, the labor force participation rate softened. Perhaps discouraged workers exited the market, thereby pushing down unemployment.

Moreover, average hourly earnings disappointed relative to expectations. Given recent softer signals from the Fed’s preferred measure of inflation, the jobs report might have underlined a neutral Fed that isn’t ready to hike soon. The US Dollar fell alongside front-end government bond yields. With that in mind, don’t be too surprised if regional equities rise and the anti-risk Japanese Yen weakens.