As expected, the aggressive selloff in Asia Pacific benchmark stock indexes echoed into both the European and US trade. The DAX and S&P 500 tumbled 2.17% and 0.55% respectively as US government bond prices rallied, signaling a flight to safety. However, there is a slightly different story for the latter which began with a gap to the downside as an earnings report from an economic bellwether crossed the wires.

Caterpillar Inc., despite having earnings that surpassed economists’ expectations, initially plunged 7.7 percent to its lowest since September 2017. This followed the company citing concerns about rising raw material costs given higher tariffs amidst US trade wars. Then, the general deterioration in market mood was lifted as Caterpillar’s CEO Jim Umpleby spoke around 15:00 GMT.

The CEO offered reassuring commentary, noting that many of their end markets continue being strong and are in the early stages of recovery. It appeared to work, Caterpillar’s stock as well as the S&P 500 began paring losses, but not enough to fill their gaps. With that in mind, the anti-risk Japanese Yen gave up some of its gains while the pro-risk Australian and New Zealand Dollars trimmed a portion of their losses.

Sentiment-linked crude oil prices succumbed to selling pressures, dropping as much as 4.94% which was the most aggressive decline in a day since May 2017. On top of this, you had Saudi Energy Minister Khalid Al-Falih who noted earlier in the day that ‘we will meet any demand that materializes’ as it signaled that it could perhaps continue fighting against rising oil prices.

Much like yesterday, a lackluster offering of economic data is likely to place risk trends as the primary driver for markets during Wednesday APAC trade. Given the aggressive declines seen in recent sessions, there may be room for some corrective gains in the near-term for the Nikkei 225. But the bigger fundamental picture for market mood remains at risk to themes like Fed rate hikes, trade wars and political uncertainty.

On a weekly chart, crude oil prices are risking a reversal of the dominant uptrend from July 2017. A rising trend line from then has now been broken and prices are eyeing support around the 38.2% Fibonacci retracement at 63.59. Meanwhile a descending resistance line from the beginning of October seems to be holding up. A push above 68.67 exposes the current 2018 high around 76.88. 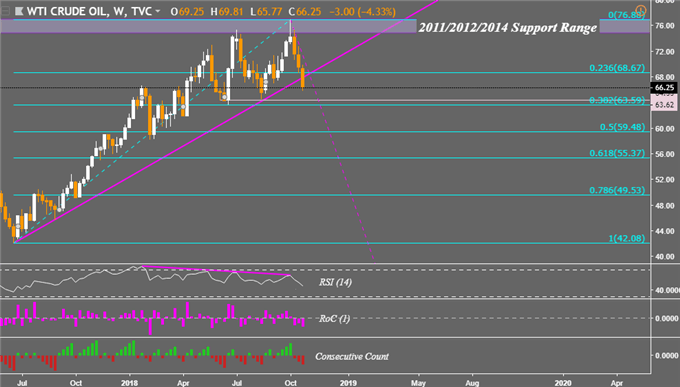