As anticipated, Asia Pacific benchmark stock indexes traded aggressively lower following declines from the European and US sessions. The Nikkei 225 declined around 2.22 percent heading into Tuesday’s close, led lower by all of its sectors. This puts it on track for the worst performance in a single day since October 11th and more weakness could be on the way.

Amidst a relatively quiet economic calendar docket, South Korea’s KOSPI, China’s Shanghai Composite and Australia’s ASX 200 found themselves heading about 2.46%, 1.37% and 0.79% lower. This was matched with more gains in US government bond prices, signaling that investors are taking risk off the table and are seeking haven assets to preserve capital. The highly liquid US Dollar thus got a slight boost.

A lackluster offering of data opens the door for markets to focus on relative geopolitical concerns and bigger picture themes. This year that has been tightening global credit conditions, trade wars and political uncertainty. The US tariff rate on $200b in Chinese imports is set to increase from 10% to 25% beginning next year. Meanwhile Brexit, Italian budget and emerging market concerns risk deteriorating sentiment.

Join DailyFX Analyst Dimitri Zabelin as he covers the impact of Brazilian elections on markets this Thursday at 22:00 GMT.

With that in mind, S&P 500 futures are pointing lower as APAC trade is wrapping up for the day. This could mean that the ‘risk off’ trading dynamic will continue. As such, the ‘pro-risk’ Australian and New Zealand Dollars may add more to their declines already seen thus far. Meanwhile the ‘anti-risk’ Japanese Yen is poised to continue making gains against most but the greenback.

AUD/USD is also making more meaningful progress to the downside and has now cleared one of the key support barriers preventing resumption of the dominant downtrend. Meanwhile the Indonesia Rupiah faces potentially critical forward guidance from its associated central bank.

On a daily chart, the Nikkei 225 has broken under a range of horizontal support dating back to early September. This has exposed 21,851 (August lows) next but positive RSI divergence warns downside momentum is ebbing and may precede a near-term correction. Immediate resistance is a descending trend line from the beginning of October. 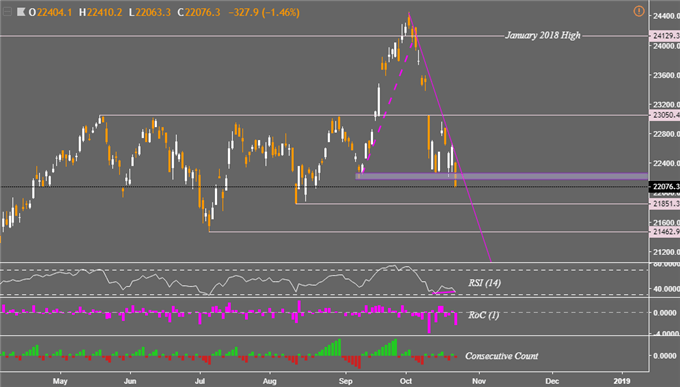