US Dollar Sank on Biden Election Lead, Capital to Flow into Emerging Markets?

The US Dollar sank against its ASEAN counterparts such as the Singapore Dollar, Indonesian Rupiah, Malaysian Ringgit and Philippine Peso this past week. This is as it became increasingly clear that Democratic nominee Joe Biden could win the presidential election against incumbent Donald Trump. Global market sentiment improved, with Wall Street finishing off the best week since early April.

Recommended by Daniel Dubrovsky
What is the road ahead for the US Dollar this quarter?
Get My Guide 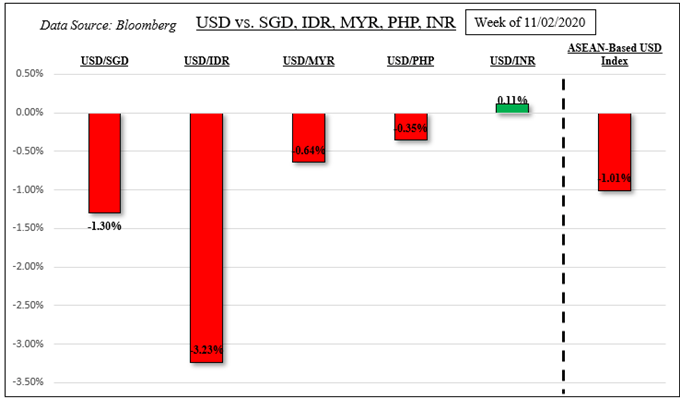 A Joe Biden presidency for the next 4 years would mean a major shift away from the current administration’s approach to foreign policy. A signature of Trump’s external strategy is his trade war, particularly with China, which contributed to the slowdown in global growth before the coronavirus pandemic. A cooldown in tensions between the two economic powerhouses would be a sigh of relief for general market sentiment.

As a result, capital poured back into Emerging Markets this past week – see chart below. The MSCI Emerging Markets Index (EEM) closed at its highest in over 2 years. With that said, the path forward contains some elements of uncertainty. President Donald Trump has filed lawsuits in key battleground states to challenge vote tallies. Expect some elements of volatility until these are settled.

Going forward, all eyes remain on the direction the nation is heading with more fiscal aid. A divided government is likely, with Georgia’s Senate race in a runoff. The composition of the upper chamber of the United States Congress will likely be unknown until early January. Senate Majority Leader Mitch McConnell, referencing October’s rosy jobs report, hinted at a smaller fiscal package than what Democrats are proposing.

A rising risk for sentiment, that could reverse losses in the US Dollar, are creeping coronavirus cases locally and externally. Lockdowns were recently reintroduced in parts of Europe. The EU is also due to impose $4 billion in WTO-approved retaliatory tariffs against the US on November 10th for the latter’s aid to Boeing Co. Trump has hinted at retaliation should these go ahead. The US election has thrown a curveball here however.

Check out DailyFX’s content around this likely volatility-inducing event here. 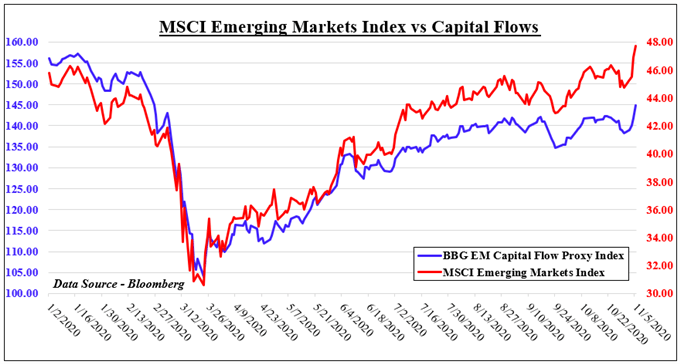 Focusing on ASEAN and South Asia event risk, there are a few items to watch for. On Tuesday Philippine third-quarter GDP will cross the wires. Output is expected to shrink 9.6% y/y versus -16.5% in Q2. Malaysian GDP data is then due on Friday where growth may fall 6.5% y/y in the same period from -17.1% prior.

India will also update the latest industrial production figures on Thursday. But, given the prominence of external risks, USD/PHP, USD/MYR and USD/INR will likely focus on news flow elsewhere that drives sentiment – see chart below.

The ASEAN For other data on, check out the DailyFX economic calendar.

On November 6th, the 20-day rolling correlation coefficient between my ASEAN-based US Dollar index and the MSCI Emerging Markets Index rose to -0.86 from -0.71 from last week. Values closer to -1 indicate an increasingly inverse relationship, though it is important to recognize that correlation does not imply causation. 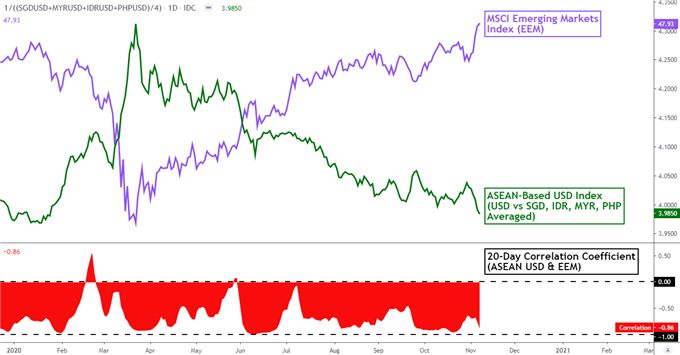