This is a special report that discusses how Yuan-ASEAN FX dynamics played out during and after the 2008 financial crisis. The latter currencies include the Singapore Dollar (SGD), Indonesian Rupiah (IDR), Malaysian Ringgit (MYR) and Philippine Peso (PHP). These are tied to nations that have key trading relationships with the world’s second-largest economy, China. How might that impact their trends with sentiment?

Over a decade ago during the heat of the global financial crisis, there was an aggressive shift in capital flows with an orientation away from pursuing return and into minimizing risk. The MSCI Emerging Markets Index (EEM) fell over 62 percentfrom its peak in May 2008 to its trough five months later in October. This is as the Chinese Yuan aggressively appreciated against an average of ASEAN currencies – see chart below.

Yuan Appreciated in 2008 Versus ASEAN FX as Sentiment Deteriorated 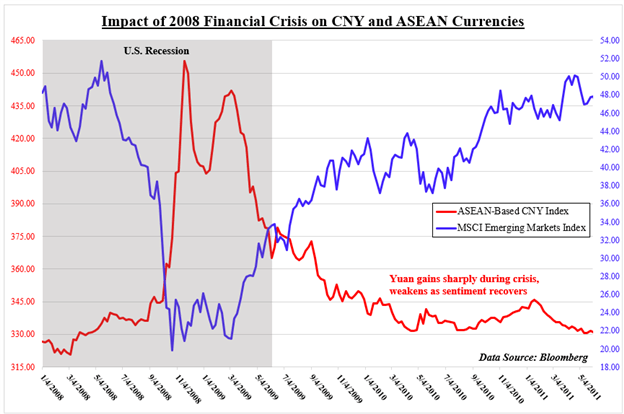 In the years that followed, this inverse relationship between my ASEAN-based Yuan index and with general market sentiment seemed to continue. From the middle of 2011 until the early stages of 2016, the EEM slowly traded lower with episodes of sideways price action. At the same time, we saw a steady appreciation in the Yuan against its ASEAN counterparts.

The Relationship Between Yuan-ASEAN and Risk Trends Remained Inverse Afterwards 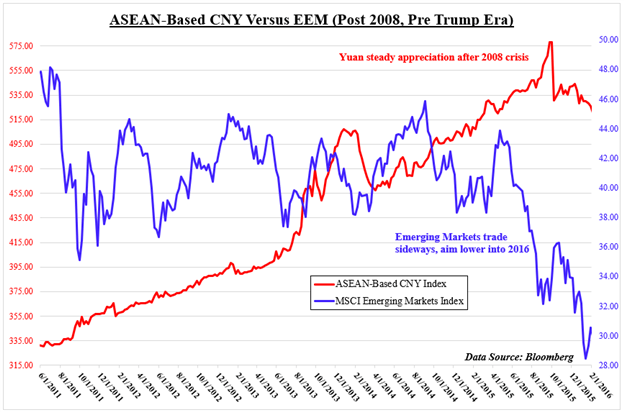 However, the relationship between the Yuan’s value against ASEAN FX began to slowly show a positive correlation after Donald Trump was elected President in 2016. One of his areas of interest was the large trade deficit the United States had –and still does – with China. Since the campaign trail, his goal has been to reduce it. As a policy route, he chose protectionism and started a trade war.

China’s still-heavy reliance on trade made it relatively more vulnerable to an escalation in cross-Pacific trade tensions. Since the trade war was pointedly aimed at China,it is not surprising that the Yuan started to take on a more pro-risk role when comparing it to the MSCI Emerging Markets Index.

Throughout 2018 and most of 2019 when the EEM weakened, my ASEAN-based Yuan index aimed lower. With that in mind, if tensions between the world’s largest economies heat up again, the CNY may again face formidable selling pressure. The past inverse relationship between its price action and market buoyancycould be restored if China and the US settle their differences. 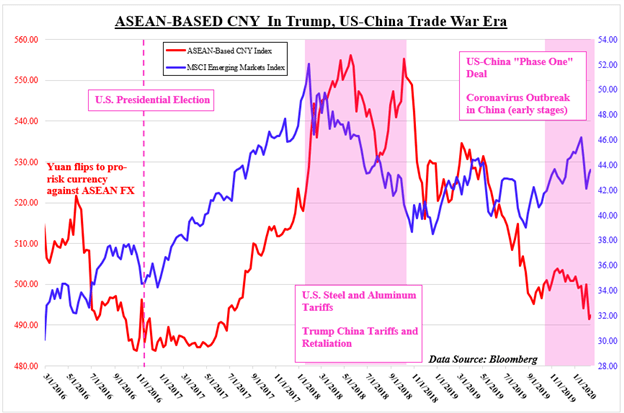 2020 delivered a black swan event, the coronavirus outbreak.It started in China and spread across the world, placing global growth at risk. This fueled capital outflows from Emerging Markets that surpassed levels during the 2008 financial crisis. Liquidation of riskier investments likely rekindled the Yuan’s “anti-risk” dynamic against ASEAN currencies as it relived 2008. This relationship could be revisited during future periods of systemic market stress. 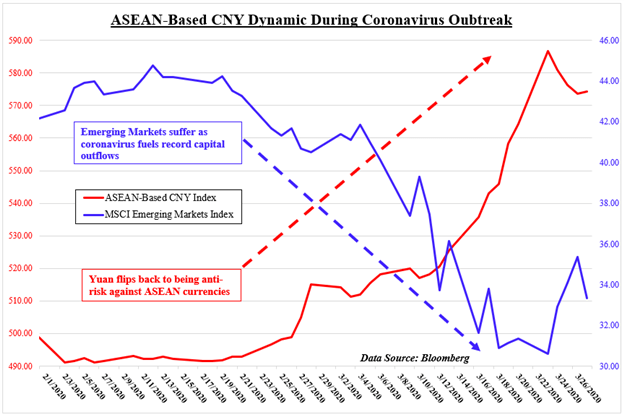