US Dollar Back on the Offensive? USD/SGD, USD/PHP, USD/MYR, USD/IDR

The US Dollar was generally back on the offensive against ASEAN currencies such as the Singapore Dollar, Indonesian Rupiah and Malaysian Ringgit last week. Meanwhile the Philippine Peso held its ground, cautiously rising – see chart below. Elsewhere in emerging markets, the Greenback also outperformed against the Indian Rupee as coronavirus cases picked up pace locally.

Additional fiscal stimulus from Singapore as the MAS eased policy has thus far not bode well for SGD. Rather the focus for developing economy currencies remained on the flow of capital. The United States – the world’s largest economy – revealed worrying trends in the labor market last week as the nation lost the most jobs since 2009. This is as the country took the spot as the nation with the most confirmed cases of the coronavirus. 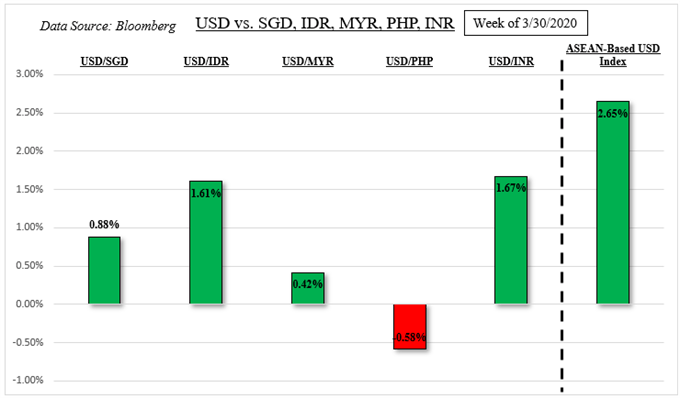 Philippine Peso Held Ground, Why Might Have That Been?

The importance of capital flows for ASEAN FX can be noted by taking a look at USD/PHP. The pace of outflows in local net foreign stocks investment slowed into the end of March compared to the front-end of the month. On the next chart below, USD/PHP can be seen having a cautious inverse relationship with foreign flows coming in and out of the Philippine Stock Exchange. In the context of COIV-19, some investors may view the nation as a relatively reduced risk given lower exposure and reliance on Chinese tourism.

Meanwhile the government is currently creating a fiscal package to help support the economy with the island of Luzon under quarantine until the middle of April. As the details are revealed, stimulus expectations may offer a near term boost to PHP. Benjamin Diokno – governor of the Philippine Central Bank – mentioned that the monetary authority “can do much more if needed” in the aftermath of slashing rates 75-bp this year. 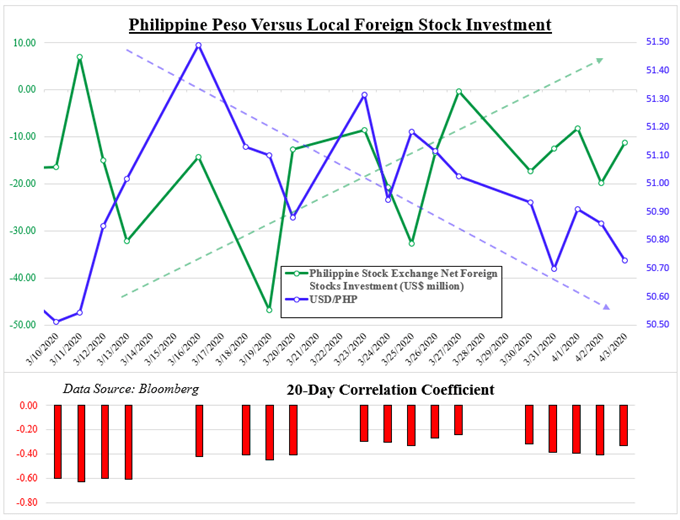 More broadly speaking, my AESAN-based US Dollar index rose this past week. It averages the USD against SGD, PHP, IDR and PHP. This is as the MSCI Emerging Markets Index declined alongside a proxy that tracks capital flows in developing economies. The haven-linked Greenback may continue its rise if hesitant investors remain reluctant to invest in ASEAN economies and instead prioritize preserving capital. With the US economy suffering, many view a recession there as compounding the anticipated contraction in global growth. 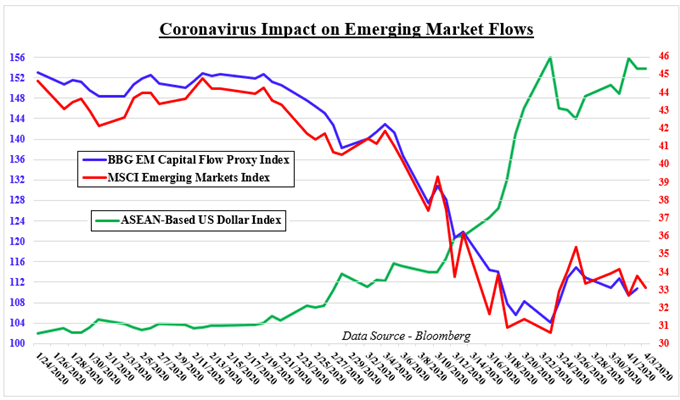 With that in mind, broader trends for USD/SGD, USD/PHP, USD/IDR and USD/PHP will likely continue being shaped by external forces. US jobless claims have become of high importance as they paint an immediate picture of how the economy might be faring amid social distancing rules. This week, filings are anticipated to rise by 5 million. Meanwhile University of Michigan Sentiment is expected to drop to the lowest since 2013.

It should be noted that US data has been consistently tending to underperform relative to economists’ expectations, opening the door to further dismal surprises. So long as this trend continues, the Greenback could continue finding support as the world’s reserve currency and brushing aside aggressive easing that has so far been delivered by the Federal Reserve. If optimism ensues instead, USD could be left vulnerable.

The latter could be key in helping to alleviate Asia Pacific market stress. For ASEAN nations, China is a key trading partner. Yet as the nation appears to be on the verge of relaxing quarantine measures and increasing output, it will find that nearby and distant neighbors are tightening their measures. Market volatility around Chinese data releases this week remained fairly constrained despite their rosy implications.

Shifting my focus on regional event risk, ASEAN nations will be releasing the latest readings on foreign exchange reserves on Tuesday. These may reveal how hard their respective central banks are fighting to deter selling pressure in their currencies. On Wednesday Philippine trade data will cross the wires with exports expected to rise just 3.0% y/y in February, down from 9.7% prior. As mentioned earlier in this article, USD/PHP may instead focus on the direction of capital flows.