Crude oil prices, along with the Swedish Krona and Norwegian Krone may rise amid market-wide buoyancy as the US and China prepare to officially sign “phase 1” of their multi-sequential trade accord. Trade representatives from Washington and Brussels will also be meeting. Swedish Krona traders will be closely scrutinizing upcoming CPI data following the publication of the Riksbank’s meeting minutes last week. 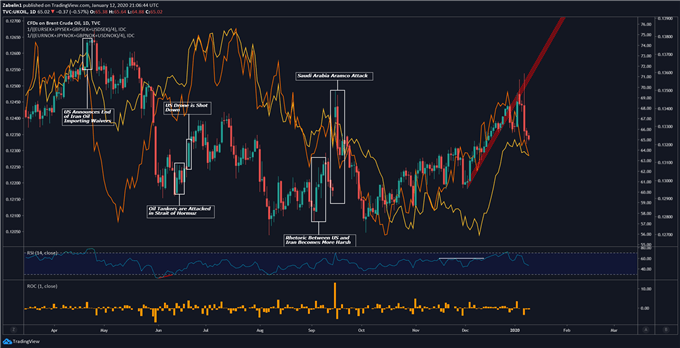 Chinese Vice Premier Liu He will be visiting Washington to sign the much-awaited “phase 1” trade deal after over a year of economic war and heightened geopolitical tensions. Markets may breathe a sigh of relief after it is signed, which may then be followed by additional jubilance if officials calm market angst about geopolitical tensions between the two powerhouses.

In this environment, crude oil prices and the sentiment-linked NOK and SEK may rise with global equity markets. While “phase 2” will not likely be established until after the US Presidential election, the soft détente may elicit a relief rally. However, that relationship may turn sour if Washington supports anti-Chinese political movements in Taiwan and Hong Kong.

Over the weekend, Taiwan held an election where the “independence-leaning” candidate Tsai Ing-wen won in a landslide victory over her pro-China counterpart Han Kuo-yu. She was voted 57% in favor with her counterpart at 38%. Following the election, Hong Kong protesters in Taipei celebrated her victory, believing it could provide a boost to their cause as part of a broad effort to push back against China.

Secretary of Statement Mike Pompeo congratulated Tsai publicly, applauding her efforts “in the face of unrelenting pressure”. Washington now has to carefully walk the line of maintaining its foreign policy stance without compromising President Donald Trump’s thin trade victory with Beijing. If the US’ support for Taipei and Hong Kong is too blatant, it could endanger future trade progress with China.

Under these circumstances, cycle-sensitive assets like crude oil, NOK and SEK may end up being at the mercy of cross-Pacific foreign policy disputes. With the US Presidential election approaching, Beijing’s leverage in trade talks may grow as the prospect of a collapsed trade deal would likely hurt Mr. Trump’s ability to get elected. These developments may have cross-asset impacts, which therefore warrants closer scrutiny.

The EU’s new trade chief Phil Hogan will be flying to Washington to meet with his counterpart Robert Lighthizer in effort to defuse tensions and repair damaged trade relations. This comes after USTR’s chilling message about future auto tariffs. While significant progress may not be made, the nature of their meeting may say a lot about what footing both sides are starting on as the cross-Atlantic divide in policy grows.

Fed officials will also be speaking throughout the week which may elicit volatility in US Dollar-crosses in addition to the release of US retail sales data. If the critical economic statistics beat forecasts and cool rate-cut bets, Brent along with NOK and SEK may rise on the optimism. This buoyant environment may be amplified by commentary from Fed officials if their outlook cools recession fears.

Swedish Krona traders will also be turning their focus on CPI data following the publication of the Riksbank’s meeting minutes. Year-on-year, CPI and CPIF prints are expected to remain unchanged at 1.8 percent and 1.7 percent, but their month-on-month counterparts are expected to grow 0.4 percent and 0.5 percent, respectively. However, if inflation persistently fails to meet their 2 percent target, it may inflame easing expectations.