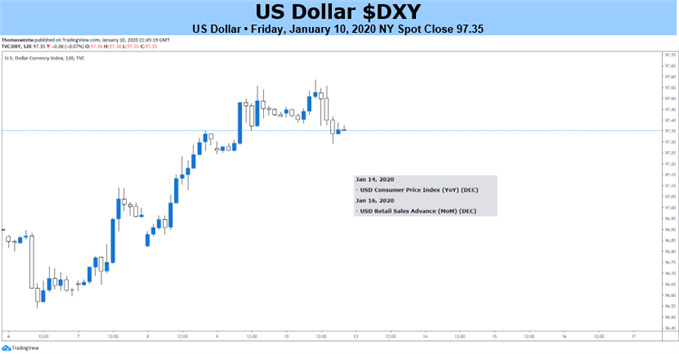 The US Dollar may rise if optimism from the US-China trade deal signing and robust retail sales data cool 2020 Fed rate cut bets. This comes as US-Iran tensions continue to oscillate but are modestly cooling for now, and UK lawmakers are expected to pass the Brexit Withdrawal Agreement Bill. Together, these waning geopolitical risks in the week ahead may reduce the urgency of Fed easing and push the US Dollar higher.

On January 15, Chinese Vice Premier and chief trade negotiator Liu He will be flying to Washington DC to officially sign “phase 1” of the multi-sequential US-China trade agreement. The accord requires China to purchase more agricultural goods from the US, beef up protections for IP rights, open up its financial sector and promise not to manipulate the Yuan.

In return, Washington agreed to scrap the $115 billion of new tariffs that were designed to be deployed on December 15 and slash existing tariffs by 15 percent on approximately $120 billion worth of goods. For now, markets cheer this surface-level victory, with President Donald Trump saying he will start negotiating phase 2 with China immediately. However, the caveat is he does not expect to sign it until after the November election.

However, in the short term, markets will likely rejoice on the official signing – despite not much else being revealed about the actual deal – and may also revel in optimistic comments from Chinese and US officials. Investors may see the US Dollar rise with stocks at the expense of gold prices and Treasuries if the perception of improved relations cools 2020 Fed easing expectations.

EU-US trade tensions remain high but are on the backburner for now as a fundamental risk. However, an upcoming meeting may help repair relations. The EU’s new trade chief Phil Hogan is planning a trip to the White House where he will meet with US Trade Representative Robert Lighthizer through January 16. Despite the US’ recent threats, for now, Mr. Trump may take a softer approach to policy which may boost the USD.

Retail Sales: What to Expect

Advanced retail sales on a month-on-month basis are expected to have grown 0.3 percent in December, slightly higher than the prior 0.2 percent print. Ex-auto and gas retail sales in the same time frame are projected to show a 0.5 percent growth for December, notably higher than the prior 0.1 percent figure. If these statistics beat their respective estimates, the US Dollar may rise against its major counterparts.

Year-on-year CPI data is expected to show a 2.3 percent rise for last month, higher than the previous 2.1 percent figure. Price growth for December excluding food and energy is anticipated to remain unchanged at 2.3 percent. After peaking in June 2018, CPI data began to slide but it is now showing signs of recovery as it hovers around November 2018 highs. However, if the data underwhelms, it could curb some of USD’s gains.

Several Fed officials will be speaking throughout the week which may cause some oscillations in the Greenback. A number of policymakers have said they believe rates are “appropriate” where they are, and unless economic conditions materially worsen, they do not see a case for cutting interest rates. Officials also said they will not hike rates unless they see a sustained period of inflation above their 2-percent target.