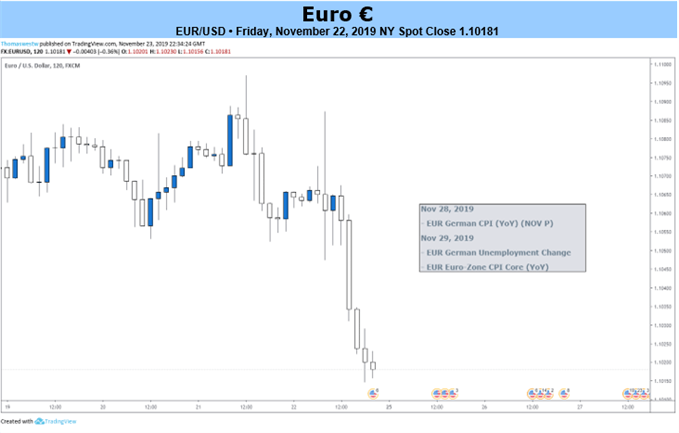 The Euro may undergo selling pressure in the week ahead if EU-US trade war tensions flare up against the backdrop of deteriorating negotiations between Beijing and Washington. While ECB officials anticipate a prolonged period of slower regional growth, a fallout in cross-Atlantic trade negotiations could put the financial stability of the Eurozone at risk. Key data may also weaken the Euro if it fuels ECB rate cut bets.

Officials in Washington are reportedly looking for new ways to impose tariffs against the EU after US President Donald Trump missed the November 14 deadline to impose auto levies on the basis of Section 232. This clause in the Trade Expansion Act of 1962 allows the US to tax specific imports if the Department of Commerce determines that specific economic relationships pose a national security threat.

However, policymakers can still weaponize Section 301 of the Trade Act of 1974 which would entail a far broader investigation of the EU and US’s trading relationship. The section in question permits the US President to impose tariffs or other various trade restrictions if the country under scrutiny is found to be undermining US commerce.

Why does it matter for the Euro? A prolonged period of stress in EU-US trade relations means the disinflationary effect of economic uncertainty would likely further pressure the already-shrinking industrial sector. Fed Chairman Jerome Powell has already attributed the manufacturing “recession” to the US-China trade war. Escalated cross-Atlantic tensions would only compound this trend and undermine the EU’s growth.

The contagion of an industrial slowdown to the services sector is a growing concern among policymakers who fear that an erosion of the labor market could magnify the probability of a downturn in the near term. OECD countries have managed to stay relatively resilient precisely because employment and job creation has managed to keep their economies afloat, though if that were to be endangered, central banks may have to act.

While overnight index swaps are currently pricing in a less-than-even chance of ECB easing stretching all the way out to October 2020, the compounding effect of chronic underperformance could spur rate cut bets. Furthermore, weaker economic activity from an escalation in trade tensions and softer job creation would likely pressure what are already heavily bruised inflation expectations.

Traders will be closely watching a cascade of CPI and unemployment data publications throughout the week. Preliminary estimates year-on-year price growth for November are expected to have grown 1.3 percent, slightly higher than the prior 1.1 percent print. The unemployment rate is anticipated to remain unchanged at 7.5 percent. Numerous data publications from Italy and Germany may also warrant traders’ attention.

Is the Cure to European Financial Instability Also It’s Poison?

While policymakers may become more inclined to introduce additional liquidity provisions to boost economic growth and inflation, there is growing concern that the side effects of ultra-loose policy may undermine Eurozone financial stability. The chart below also demonstrates that an increasingly swollen balance sheet has failed to sustainably deliver ever-greater stimulus.

Note: On the chart above, financial condition index readings above indicate accommodative credit markets while values below it points to tightness.

With negative rates and QE, easy credit conditions have left yield-starved investors in search for greater returns. However, this has also resulted in an explosion of leveraged loans, collateralized loan obligations and other precarious debt instruments that are sensitive to economic downturns. According to the IMF, over 40 percent of corporate debt could be at risk of default if a shock half as potent as the one in 2008 hits the system.

However, the ability of ECB policymakers to enforce counter-cyclical monetary measures is somewhat limited. The potency of deeper cuts into negative territory may lack the capacity to meaningfully alter inflation expectations and boost economic activity. Officials are urging using fiscal policies to spur demand during a downturn, but the institutional rigidity of the EU – intended to preserve stability – may be its Achilles heel.