The Swedish Krona and Norwegian Krone are expected to experience unusually-high volatility in the week ahead amid Iranian geopolitical tensions and a packed economic data docket. Ongoing Brexit talks may spark additional volatility in British Pound-Nordic FX crosses as the January 31 deadline approaches. Swedish PMI, Riksbank minutes, Norwegian CPI and retail sales will be key statistics to monitor for Nordic traders.

Crude oil prices spiked after news broke that Iranian General Qasem Soleimani was killed in Iraq by a US drone strike. The death of the Iranian commander induced market-wide risk aversion and sent equities lower along with sentiment-linked assets like the Krona and Krone. Tensions between Washington and Tehran flared up as the prospect of war cast a long shadow on what is already likely to be a politically-turbulent year. 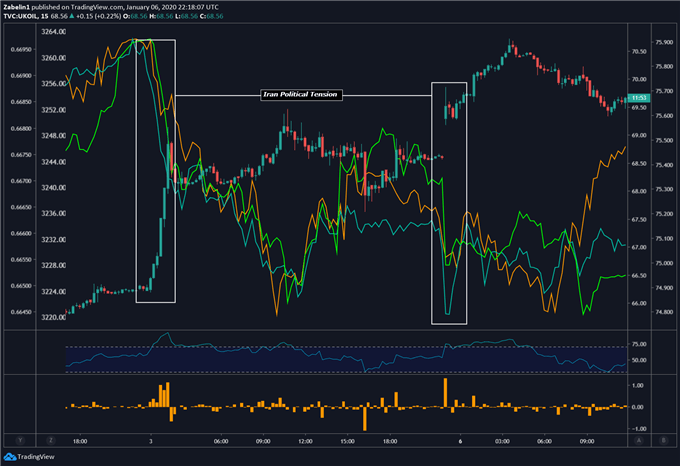 Iran and the US subsequently exchanged threats, with the latest ones including a tweet from President Donald Trump warning of a “major retaliation” if Tehran strikes back for the death of Soleimani. More specifically, Mr. Trump has said he will target 52 Iranian sites, some of which are “very high level & [are] important to Iran & the Iranian culture”.

Assuming geopolitical tensions continue to remain high, crude oil prices may continue to be buttressed by the prospect of future supply disruptions, but it may not be enough to keep crude afloat. Rather, meaningful progress on other fundamental themes – like the US-China trade war – would likely need to be made before Brent trades reliably above $60 a barrel.

As the primary destination for over 70 percent of Sweden’s and Norway’s cross-border sales, economic data from the Eurozone typically has an impact on the export-driven economies of the North. Some critical statistics to monitor throughout the week will be: retail sales, preliminary CPI readings, various confidence indicators and jobs data. Better-than-expected readings could push the sentiment-linked Krona and Krone higher.

Brexit: What’s Next, Why Does it Matter for Nordic FX?

The British Pound continues to be held hostage by ongoing Brexit talks, though for a change, there is some certainty in the situation. Following the market-friendly UK election, Prime Minister Boris Johnson will now be able to pass the Withdrawal Agreement Bill as the January 31 deadline approaches. After that, trade talks will begin which could cause convulsions in the British Pound and its Nordic counterparts.

The Riksbank has repeatedly cited a disorderly Brexit as a major fundamental risk facing the Swedish economy. With no-deal Brexit fears cautiously subsiding, NOK and SEK have risen in part on political optimism. However, following January 31, if progress on an EU-UK trading relationship appears stagnant, it could revive no-deal Brexit fears and push the British Pound lower along with Nordic FX.

The Swedish Krona may rise on services and composite PMI data, though the expected numbers for the former remain in contractionary territory at 47.9, unchanged from the prior period. However, given this week’s better-than-expected Eurozone PMI readings, a knock-on effect of increased economic data may echo into the Nordic states. An impressive report could boost the Swedish Krona against the Euro and extend EUR/SEK’s decline. 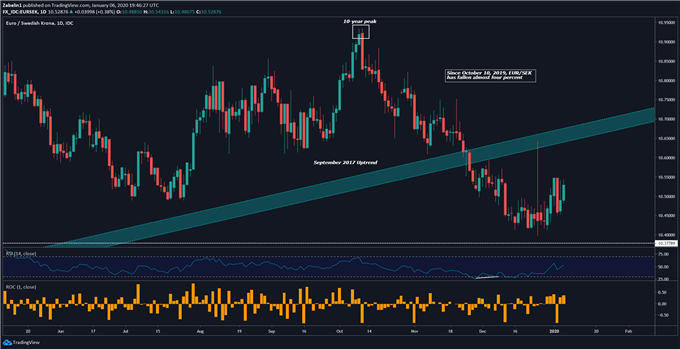 Swedish retail sales are expected to a show a year-on-year expansion of 2.5 percent for November, slower than the prior period which saw a 3.3 percent rise. A cascade of manufacturing reports will also be released on Friday, though they will likely show weakness as part of a global trend of the industrial contraction. Last week, seasonally-adjusted US ISM manufacturing data showed its weakest print since 2009.

The Riksbank meeting minutes may also spark some volatility following the central bank’s decision to pull interest rates out of negative territory. The event garnered an inordinate amount of attention due to the gravity of what it could mean for other central banks seeking to do the same. Since the decision, the Riksbank has outlined its intention to hold rates at 0 percent, though fundamental risks may derail their plans.

Year-on-year CPI is expected to remain unchanged for December at 1.6 percent, though month-on-month readings are anticipated to print a 0.1 percent contraction. While no individual data point will necessarily cause the Norges Bank to overwhelmingly support a cut or hike, chronic underperformance of key indicators – like price growth – could cause officials to tilt more dovish. Mainland GDP data will also be crucial to monitor.

The central bank has raised rates four times since the latter half of 2018, bringing borrowing costs from 0.50 percent to their current levels at 1.50 percent. At the last policy meeting in December, officials said they see rates staying at their current levels in the coming period. However, if inflation continues to come in below the central bank’s 2 percent target, officials may loosen credit conditions in order to fulfill their mandate.

US nonfarm payrolls data is expected to show a 160k print for December, slightly lower than the prior 266k figure which marked the highest reading since January 2019. Despite softer growth in manufacturing, the underlying fundamentals for the world’s largest economy remain favorable according to Fed Chicago President Charles Evans and many other FOMC members.

Cleveland Fed President Loretta Mester echoed this same sentiment, citing the consumer as the force offsetting the weaker numbers in industrial production and investment. The FOMC minutes revealed that officials believe rates are appropriate as they are, and the central bank will adjust credit conditions if circumstances materially change. Despite these comments, markets are still pricing in a rate cut by the end of 2020. 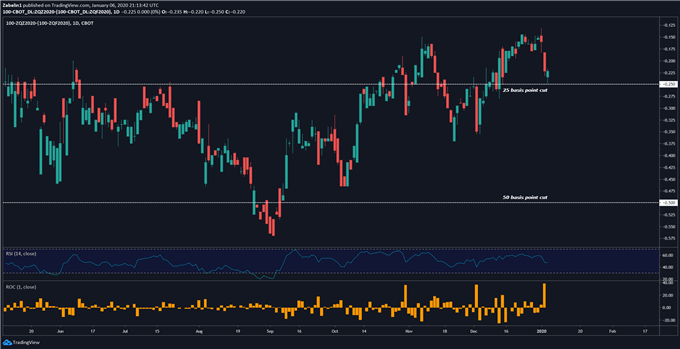 If the jobs data shows a stronger-than-expected report, it could amplify market buoyancy and push equity markets higher along with sentiment-linked FX like the Swedish Krona and Norwegian Krone. Conversely, if the employment statistics show weakness, it could inflate Fed rate cut bets and send a chill up the spine of investors if they believe the growth engine of the US economy is beginning to sputter.