On December 12th, the UK will go back to the polls in order to break the current gridlock in parliament. The general election has been seen as a proxy for a second EU referendum with voters choosing between Boris Johnson’s Brexit deal or a remain alliance, which would entail the possibility of staying within the EU. In turn, the outcome of the general election will shape the Brexit process in 2020. That said, other policies are also important with both the Conservatives and Labour party pledging more expansionary fiscal policy.

What do the Polls Show?

Much like 2017, opinion polls have been pointing to a Conservative majority, who have enjoyed a commanding lead over their nearest rivals (Labour). However, unlike that of two years ago, the Tories have managed to maintain a sizeable lead, having seemingly unified the pro-Brexit vote with an added boost from Nigel Farage’s Brexit party, who will not be campaigning for Tory seats won in 2017. By contrast, the opposition seem somewhat divided over Brexit, thus failing to narrow the gap, which in turn has made a Conservative majority the more likely outcome.

Alongside this, the YouGov MRP poll, which had correctly called 93% of seats at the previous election highlighted that the Conservatives are on course to win 339 seats, which would result in a 28 seat majority. However, risk lies with the margin of error, which does not rule out the possibility of a hung parliament. 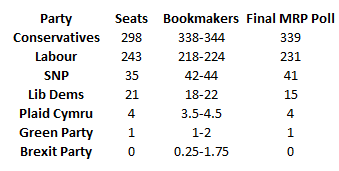 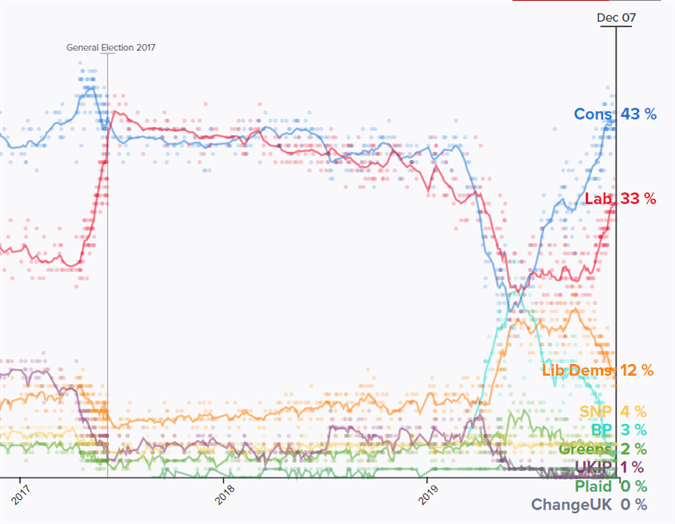 How are GBP/USD Traders Positioned?

Ahead of the general election, funds have been steadily reducing their net shorts in the Pound as markets price in the increased likelihood of a smooth Brexit resolution on the basis that the Conservative party secure a majority as indicated by the election polls. Alongside this, on the option front, implied volatility based on 1W vols in GBP/USD signals a break-even of 260pips, while the 1W GBP/USD range is expected to be 1.2850-1.3450 (68% likelihood). 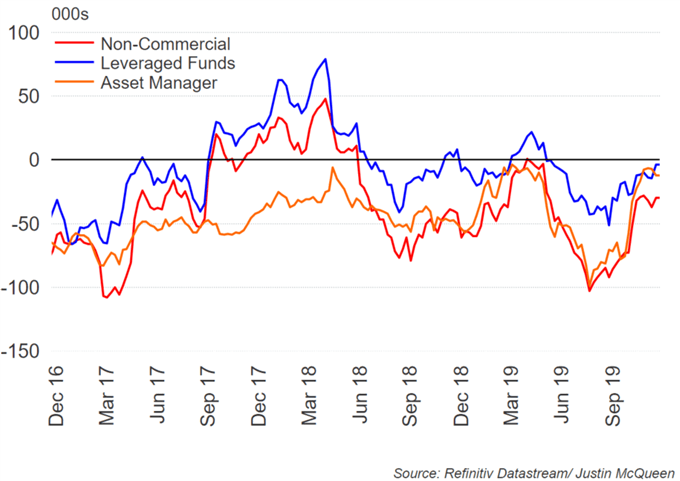 CONSERVATIVE MAJORITY: Sterling to push higher with the YTD high as the initial target (1.3382), while there would be an upside risk of a move towards 1.35, on the basis that this result would likely pave the way for a smooth Brexit process with Boris Johnson able to pass his deal (December 20th has been touted as a potential voting day) through parliament with ease and take the UK out of the EU at the end of January. Once the UK leaves the EU, they will enter into the transition period, which is set to expire by December 2020, failure to successfully negotiate an FTA between the UK and EU in this period will once again raise no-deal risks. Of note, the size of the majority will be key to the size of the Sterling move. As it stands, bookmakers (Sporting Index) are looking for 338-344 seats, as such, 330-335 seats could somewhat disappoint market expectations.

HUNG PARLIAMENT: In this event, the Pound would likely to come under notable selling pressure with GBP/USD tumbling towards the 1.2750-1.2800 area amid heightened political uncertainty. Parliament would likely remain in a state of paralysis and thus the UK could yet again request an extension to Article 50. That said, this would also depend on who is able to form a government.

LABOUR LED COALITION: While GBP/USD may initially head lower, we would expect further losses to be stymied and instead see GBP/USD reverse initial losses on the viewpoint that a Labour government with the help of the SNP and Lib Dems would lead to a more positive Brexit situation (softer Brexit), alongside an increased expectation of a second referendum. However, risks would likely stem from Labour accepting SNP’s demands for a second Scottish independent referendum, which could take place in 2021.

22:00: An exit poll will be published by Ipsos Mori for both the BBC and Sky News, which will give a projection of the final seats won by each party. In recent history, the exit poll has been very accurate and has typically generated the largest market reaction.

23:00: Counting begins from 22:00 with the first results typically announced between 23:00 and 00:00 in which Sunderland and Newcastle battle it out to be the first constituencies to declare.

03:00: From this time, it is expected that around 50% of the vote would have been declared. A good indication into the final result is likely to be provided from 04:00, given that over 80% of votes are expected to have been counted (see graph below).

06:00: By this time, the party leader would have likely claimed victory in the event of a clear majority.

Times at which broadcasters called the election result

Over 50% of Constituencies to Report by 0300GMT 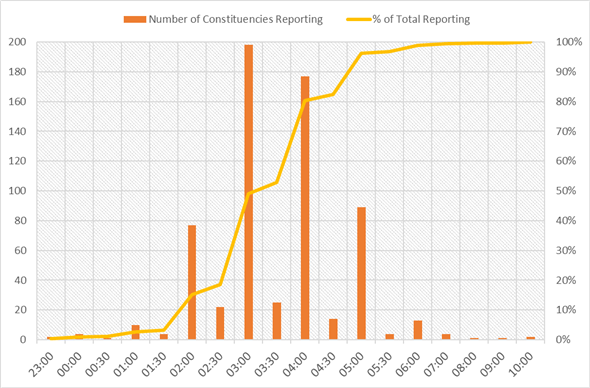 On the election night, marginal seats will be key in determining the outcome of the election. As such, the table below looks at the constituencies whereby the margin between the winning party and the runner-up was less than 5% at the 2017 general election. Alongside this, given that the public view that Brexit is the most important topic in the run-up to the election we have added the Brexit referendum result to provide greater understanding as to which way constituencies may lean. For example, Labour’s Ashfield seat, which had overwhelmingly voted in favour of Brexit is at risk of being be lost to the Conservatives.

Elsewhere, seats that tend to move with the national swing will also be in focus. An example of this is Stockton South. 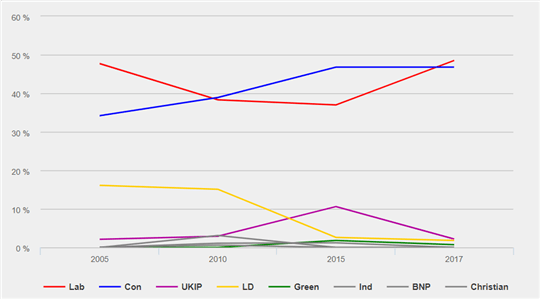 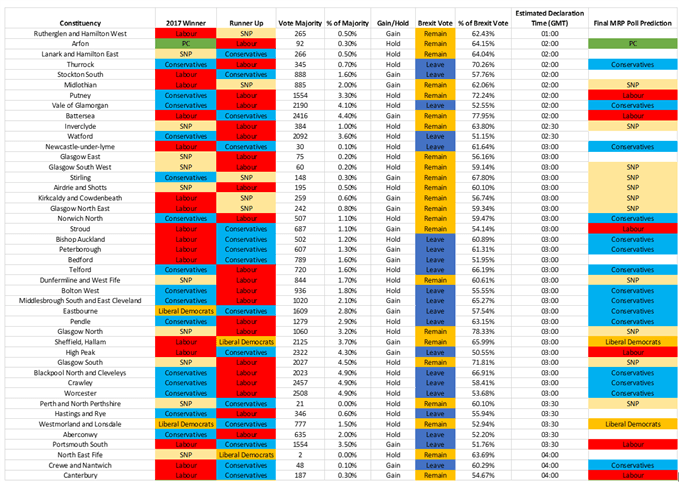 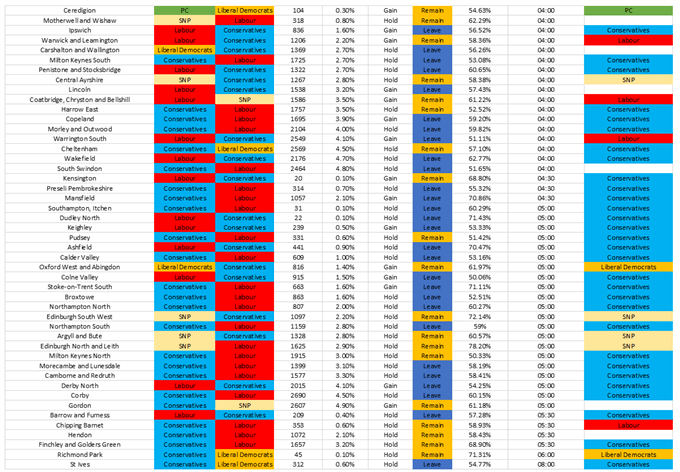