The Indian Rupee soared against the US Dollar as the Nifty fell after the Reserve Bank of India (RBI) caught markets off-guard with a rate hold. Yesterday, policymakers voted unanimously to keep the benchmark repurchasing rate at 5.15 versus 4.90 percent anticipated. No economists surveyed by Bloomberg anticipated this outcome, underpinning the dramatic surge in Indian government bond yields – see chart below. 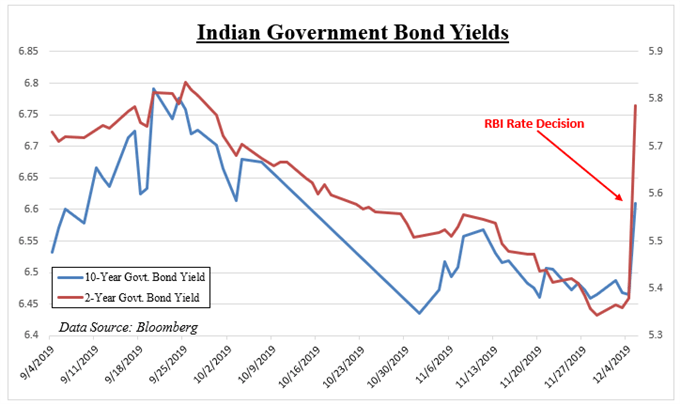 Slowing GDP and industrial production, a struggling banking sector and trade wars have been fueling aggressive dovish expectations. In fact, Thursday’s rate hold marked a pause in the central bank’s easing cycle after it delivered 5 consecutive cuts in 2019. This is despite the RBI anticipating growth to slow in fiscal 2020 to 5 percent from 6.1.

Calls for a pause reflected a combination of inflation and fiscal stimulus bets. Policymakers raised FY20 second-half CPI estimates to 5.1% from 4.7%. They noted that last month’s outcome was “much higher” than expected. Governor Shaktikanta Das said that the central bank is awaiting more clarity on government steps to boost GDP, adding that it is important for monetary and fiscal policies to work in tandem.

He went a step further to reassure markets that the RBI “will not allow” for large shadow banks to collapse, though the Governor noted that credit flow to these institutions is improving. Yesterday’s pause by no means reflects a precursor to a tightening cycle as Mr Das left the door open to further action if the situation worsens.

Event risk for the Indian Rupee include domestic CPI and industrial production data on December 12. Softer outcomes may rekindle near-term easing expectations. Externally, there remain numerous uncertainties on the global trade front such as the United State’s decision on whether to raise tariffs against China on December 15. This is as the country appears to be ramping up tensions with Europe and South America.

USD/INR faces its next major technical test as it finds itself on rising support from July – blue line on the chart below. A daily close under it with follow-through opens the door to reversing the dominant uptrend and overturning the Descending Triangle. Otherwise, a turn higher here may push prices back towards November highs and the key psychological barrier between 72.159 and 72.550. 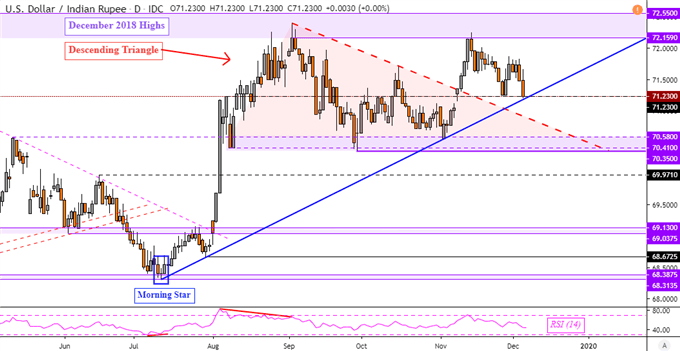 The Nifty 50 has paused its uptrend from September after negative RSI divergence preceded a cautious turn lower. This is a sign of fading upside momentum which can at times translate into a reversal. Key resistance sits above as a psychological barrier between 12103 and 12158. A daily close under 11935 opens the door to revisiting lows from November (11802 – 11843). 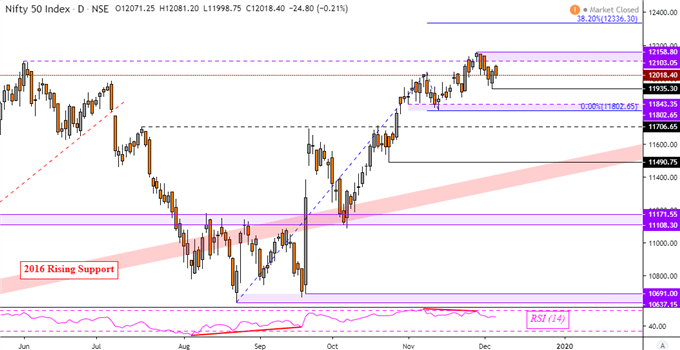