Following a period of sharp declines earlier this month, the Indian Rupee appears to have stabilized against the US Dollar. Focusing on emerging market currencies in the Asia Pacific region, INR has underperformed against the Greenback as ASEAN FX have otherwise embarked on an appreciation course. Currencies such as the Philippine Peso, Indonesian Rupiah and Singapore Dollar are faring much better.

Cautious progress in US-China trade talks appears to be behind much of the strength across the emerging markets FX (EMFX) spectrum. What may be keeping investors hesitant from committing exposure to INR is a teetering Indian banking sector. The situation is so dire that last month, growth in commercial credit to the non-manufacturing sector clocked at its weakest pace since 2017.

Moody’s then cut the country’s rating outlook to negative. Last week the Reserve Bank of India seized Dewan Housing Finance Corp., a troubled shadow bank with governance issues and payment defaults. The central bank is aiming to help reduce contagion risks which - if they are allowed to spread - would come at an inconvenient time given uncertainties on the US-China trade front (although recent optimism there has allowed the Nifty benchmark stock index to push higher).

Ahead, GDP data is due on Friday. Indian growth is expected to continue slowing amid a fragile credit environment, weakening to 4.6 percent y/y in the third quarter and down from 5.0% prior. That would be the softest pace since the first quarter of 2013, following the sharp contraction in industrial production on the chart below. A softer-than-expected outcome may sink INR, fueling further RBI rate cut bets. 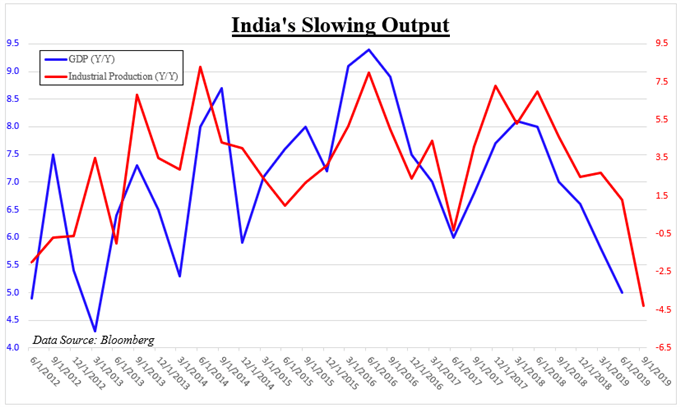 USD/INR remains in consolidation mode as markets await Indian GDP. The currency pair has broken above a Descending Triangle formation, setting up for a resumption of the dominant uptrend from July. That may be kept intact by rising support established from the bottom-signalling Morning Star candlestick pattern (blue line on the chart below). A daily close under 71.59 opens the door to testing this trend line. A softer GDP print may push it towards the September high. 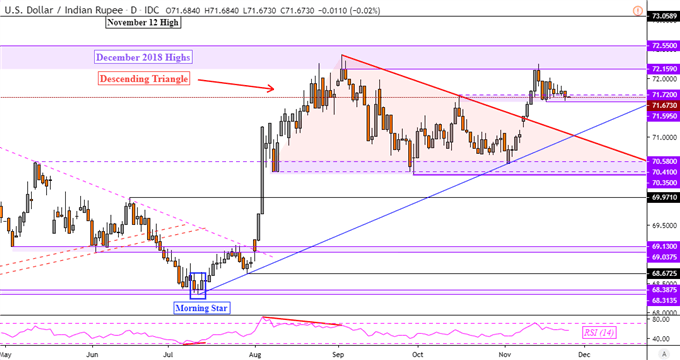 This is as the Nifty 50 – India’s benchmark stock index – sits under the June high. A daily close above 12103 would pave the way for new record highs after the equity brushed aside a break under rising support from September. However, negative RSI divergence shows fading upside momentum which can at times precede a turn lower. If sellers manage to retake the initiative, the focus will turn to key support in the 11802 – 11843 range. 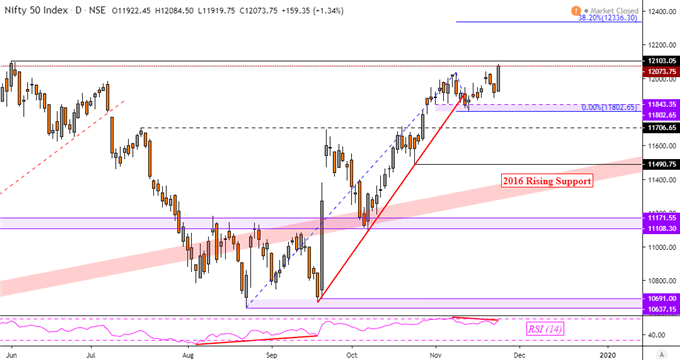