Looking at DXY, the US Dollar experienced its best week against its major counterparts this year thus far. But, this was not enough to compel similar performance against some of its ASEAN and South Asian peers. The backdrop of strength in USD was due to the aftermath of the G20 Summit and a solid jobs report from the United States. The latter helped cool aggressive Fed rate cut bets for July.

A notable outperformer from the region was the Indian Rupee, with USD/INR extending its downtrend as anticipated. A few fundamental developments likely lead to this. Frist, Indian courts allowed ArcelorMittal, a multinational steel-producing company, to proceed with purchasing Essar Steel India Ltd. This likely fueled capital inflow bets as this would open the company to entering a major steel-producing nation.

The decision for ArcelorMittal to proceed with purchasing the financially-struggling company may be challenged in higher courts. Meanwhile, the Rupee extended gains after India’s government announced a smaller-than-expected budget deficit target of 3.3% of GDP for fiscal year 2020, cooling concerns about higher bond yields. Yet, the Nifty experienced its worst day in weeks as Finance Minister Nirmala Sitharaman also announced taxes on gas and oil while also raising them for high-income earners. 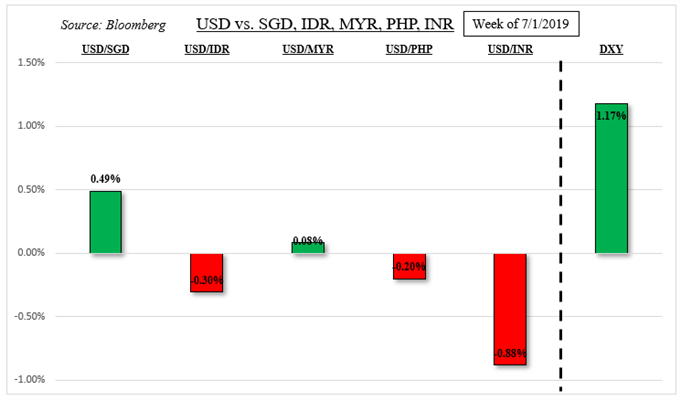 Ahead, the Malaysian Ringgit is looking to the next central bank monetary policy announcement. The Bank of Malaysia is widely anticipated to keep the overnight policy rate unchanged at 3.00% after cutting it back in May. Inflation is still low in the nation with palm oil, a key source of revenue for the country, down almost 10% (futures) since the beginning of this year. A hint that the central bank may yet cut rates again risks weakening MYR.

The week ahead also contains a couple of important Chinese economic data. The first of which is CPI and PPI for June on Wednesday. Then, on Friday we will get trade data for the same month. Relative to economists’ expectations, data outcomes are still tending to increasingly disappoint in the world’s second-largest economy.

If this pattern persists, it may continue to fuel concerns about the health of the global economy. This also poses a risk for regional trading partners such as the Philippines and Singapore. For the Singapore Dollar, it may look past local second quarter GDP data when comparing it against the US Dollar. USD/SGD tends to closely trace the Greenback compared to some of its ASEAN peers.

Meanwhile, the Indian Rupee will be nervously eyeing local inflation data. In June, Indian CPI is anticipated to clock in at 3.2% y/y, up from 3.05% in May. Yet, this is below the central bank’s 4% price target and is part of the reason why the Reserve Bank of India cut rates three times this year thus far. As such, a softer outcome may fuel further easing bets and depreciate INR.

There is plenty of event risk abroad from the United States that may also impact MYR, PHP, INR, SGD and IDR. After last week’s jobs report and US-China trade truce, markets will be looking to commentary from Fed members such as James Bullard, Charles Evans and Chair Jerome Powell. Expectations of a cut in July are still fully priced in with more expected to come.

If policymakers err on the side of caution and show any signs of hesitation of acting too quickly and aggressively, that could fuel risk aversion and a premium for liquidity. That stands to potentially boost the haven-linked US Dollar. However, a disappointing headline CPI report and FOMC minutes, also due this week, that keep chances of cuts this year on the table might just do the opposite.