This past week, ASEAN currencies generally outperformed against the US Dollar amidst an improvement in sentiment. By the end of Friday, headlines such as the Fed possibly ending its balance sheet runoff this year and progress in US-China trade talks helped push the S&P 500 to close at its highest since December 2018. Demand for the haven-linked and highly liquid US Dollar waned as DXY aimed lower. The Indonesian Rupiah was one of the best regional performers after USD/IDR fell below resistance. 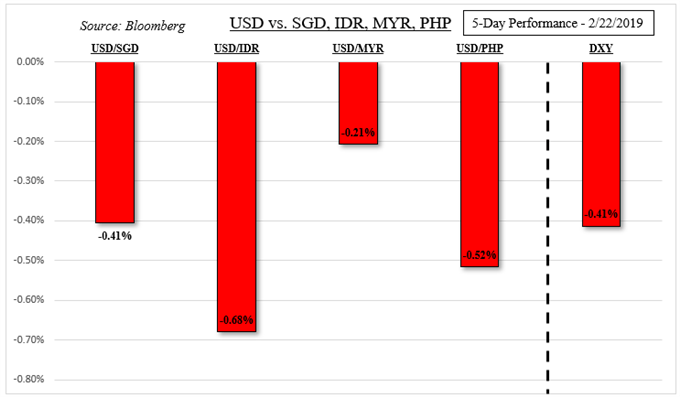 The week ahead contains a plethora of event risk for ASEAN currencies, both regionally and externally. Beginning with the former, the Singapore Dollar may look past a domestic inflation report as it focuses on developments that may impact the US Dollar down the road. Over the past 20 days, the rolling correlation coefficient between USD/SGD and DXY has been around +0.88 (see chart below). 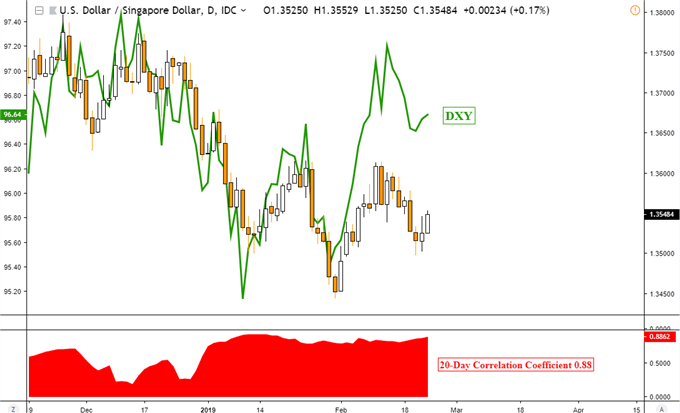 There may be a good chance that the Indonesian Rupiah also brushes aside a softer-than-expected local inflation report. Last week, USD/IDR fell despite the Bank of Indonesia holding steady on rates and showing a lack of eagerness to hike again soon. Rather, it is focused on continuing to uphold the value of the Rupiah. It reiterated that it sees it as undervalued, undermining upside progress that the pair may make.

Chinese Manufacturing and Caixin PMIs will be closely watched for signs of economic weakness in the world’s second largest economy. Nearby neighbors such as Malaysia and the Philippines have China as one of their top 5 trading partners. Chinese economic data is still tending to underperform relative to economists’ expectations, albeit this has been by a narrowing margin since the beginning of this year.

Looking more abroad, the US Dollar has plenty of local event risk waiting for it such as 4Q GDP, PCE core and consumer confidence data. Recently, softer-than-expected retail sales and durable goods orders inspired risk aversion as frets about economic weakness spread from China and Europe and into the US. More of the same may sink equities while the haven-linked Greenback rallies.

This would pressure its ASEAN counterparts lower. A sigh of relief may come from Fed Chair Jerome Powell who is scheduled to testify before Congress. The FOMC meeting minutes revealed that halting the balance sheet unwind this year seems more certain than the direction of actual interest rates. This bolstered the S&P 500 along with risk trends and may do so again if he reiterates this possibility.

A few wildcards remain on the external front: the US is expected to extend the March 1 deadline on Chinese import tariffs, President Donald Trump travels to Vietnam for another Summit with North Korea’s Leader Kim Jong Un and the UK’s Parliament could vote on a Brexit deal. An action-packed week may offer the US Dollar and equities more volatility, having knock-on effects on the sentiment-geared MYR and PHP too.